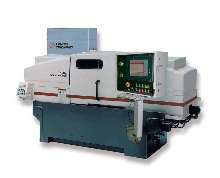 Waynesboro, Penn., May 26, 2004 - A newly improved version of the compact and productive Landis Cincinnati Viking CNC Centerless Grinder will be a highlight of Landis Grinding Systems' exhibit at IMTS in booth A-8101. The new Viking SuperSeries II centerless grinder has a combination of advanced technology and user-driven features that makes it ideal for high production applications and for grinding a diverse range of materials and components to precise tolerances using either conventional or superabrasive wheels.

Landis has also incorporated several new features and components that further improve the reliability and maintainability of the Viking centerless grinder. These include digital servo controls with SERCOS interface that significantly reduce wiring, and a new sealing arrangement for the grinder's anti-friction spindles to prevent ingress of contaminants.

Other key features of the Viking SuperSeries II centerless grinder include a nodular cast iron base for strength, stability and vibration damping. Both wheels utilize Twin-Grip mounting to eliminate orbiting and resist wheel-separating pressures under heavy loads. Even with a Twin- Grip arrangement the design allows for a 15-minute spindle-to-spindle change. The Viking grinder delivers consistent accuracy through a combination of sub-micron control resolution, a 2-1/2" diameter ballscrew, dual-axis upper/lower slide arrangement, linear scale feedback, A.C. brushless servomotors, and CNC profile contouring on both wheels.

The Viking centerless grinder accommodates parts from 0.05" to 2.4" diameter. The machine has a 20 hp or optional 40 hp grinding wheel drive. Surface speeds range from 8,500 sfpm to 12,000 sfpm for conventional abrasives and up to 16,000 sfpm for superabrasive applications. A 16" diameter grinding wheel is standard, with an optional 18" wheel available providing up to 10" of wheel width. Regulating wheel diameter is 12" standard, with a 14" diameter wheel optionally available. The all-electric Viking grinder is engineered for fast job changeovers. It has excellent ergonomic functionality and includes advanced mist and coolant containment.

At IMTS, Landis Grinding Systems will also display its LT2 Twin Wheelhead orbital crankpin grinder. The LT2 grinder's CNC controlled wheel feed permits pins to be precision ground with the crankshaft rotating about the centerline of the main bearing journals. The wheel precisely "follows" the orbit of each pin about the main journal axis. This highly productive grinder provides the flexibility needed in today's global automotive manufacturing industry by allowing multiple operations to be combined in a single grinder, thereby minimizing the number of machines and reducing capital expenditure. For example, by grinding both crankshaft concentric main journals and eccentric pin diameters on a Landis LT2 Twin Wheelhead grinder, a 5-machine process can be reduced to only two grinders.