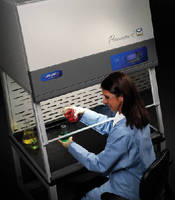 No Ducting Needed With The NEW Paramount® Ductless Enclosures

Unlike traditional fume hoods, ducting isn't necessary, so the Paramount can be moved from area to area, lab to lab. It is available in 2', 3' 4', 5', and 6' widths. A clear baffle option provides 360˚ visibility suitable for teaching demonstrations.

For additional information about the Paramount Ductless Enclosure visit www.labconco.com or come see it at Labconco booth #2677 at Pittcon, 2009.
Share