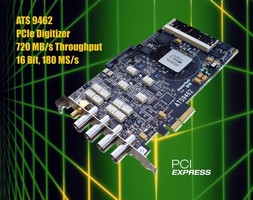 Model ATS9462Â®, 4-lane PCIe waveform digitizer offers 2 simultaneous analog inputs that can each be sampled at rates up to 180 MS/sec, providing signal-to-noise ratio in excess of 73 dB. Device uses FPGA-based PHY to interface to PCIe bus, which is also used for control and data processing. Data generated by 2 on-board A/D converters is streamed across PCIe bus for storage in PC memory or hard disk and unit is compatible with any x4, x8, or x16 PCIe slot.

ATS9462® provides 720 MB/s data throughput to PC memory, thus enabling many applications that were previously not possible due to legacy PCI bus bottleneck, which is typically limited to 100 MB/s.

ATS9462® offers two simultaneous analog inputs that can each be sampled at rates up to 180 MS/s (one 16 bit 180 MSPS ADC per channel), providing Signal to Noise Ratio in excess of 73 dB. Data from either one or both inputs can be streamed to PC memory without any requirement for on-board acquisition memory buffer. The unit is compatible with any x4, x8 or x16 PCIe slot.

The avanced FPGA on-board the ATS9462® contains FIFOs and proprietary DMA engines that allow streaming of acquired data to PC memory without having to stop the acquisition session. This unique feature is essential for designers of optical and ultrasonic scanning systems.

"We realized that the bus throughput of the legacy PCI bus was becoming a bottleneck for many of our OEM customers. Moving to PCI Express was a natural next step", stated Muneeb Khalid, President of AlazarTech. "In order to provide the utmost reliability, we integrated our PCIe core, DMA engines, acquisition engine and datapath in a single high density Stratix II GX FPGA from Altera".

ATS9462® PCIe digitizers use FPGA-based PHY (2.5Gbps transceivers) to interface to the PCIe bus. The same FPGA is also used for control and data processing. This very high level of integration allows for a very reliable acquisition system.

Another very important feature of the ATS9462® is its Stream To Disk capability. In this mode, data generated by the two on-board A/D converters is streamed across the PCIe bus for storage in PC memory or hard disk. Users can thus capture 100's of gigabytes or even terabytes worth of gapless data.

All these features are supported by AlazarDSO®, the new powerful oscilloscope emulation software from AlazarTech. A basic version of AlazarDSO® is provided free of charge with the purchase of an ATS9462® board. However, the Stream To Disk option of AlazarDSO® is sold separately.

The on-board FPGA can also be customized for OEMs. Customization can include simple control functions, such as extra triggers or trigger enables, simple mathematical functions, such as averaging, and even complex DSP functions such as FIR filters, demodulation and FFT.

AlazarTech was founded in 2003 by Muneeb Khalid who was the original founder of Gage Applied Sciences Inc., a pioneer in PC Based Instrumentation. That company was sold to Tektronix Inc. in 2000.

While AlazarTech manufactures some of the fastest PCI and PCI Express digitizers on the market, speed alone is not the differentiating factor. AlazarTech concentrates on providing usability features for its PCI and PCI Express digitizers that make them very easy to integrate into real-world OEM applications such as ultrasonic testing, medical imaging and radar signal analysis.

AlazarTech also works with selected OEMs to customize its products based on customer requirements.

The company's line of ATS PCI and PCIe digitizers have been recognized by leading European, Asian and North American OEMs as being superior in quality to other devices on the market.

The company's products have found applications in industries such as medical imaging, metal inspection, automotive and semiconductor test.

AlazarTech sells its products directly in North America, and internationally through a distribution network.