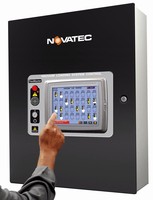 Suited for conveying plastics raw materials, FlexMaster(TM) wall-mounted, PLC-driven color touchscreen control can be wired to up to 5 vacuum pumps, 32 material receivers, and 25 purge valves. Up to 23 FlexXpand modules can be added to contol as many as 88 more receivers, 15 pumps, and 64 purge valves. Touchscreen displays functions as interactive pictorial icons, descriptive texts, and alarm messages and enables changes to operating parameters with assignable levels of security.

Conveying Control System Expands Easily, Simplifying Investment Decisions, and Can Be Accessed 'from Any PC Anywhere'

BALTIMORE, MD, U.S.A., October 21, 2008: A new series of control systems for conveying plastics raw materials can be readily expanded to include dozens of additional receivers, as well as pumps and purge valves, yet can be operated without special training, it was announced today by NOVATEC, Inc.

Called FlexMaster(TM), the system is also unique for its capability of being remotely accessed via ethernet connection, according to Chuck Morgan, resin handling business director. "From any PC anywhere in the world, you can view the same screens that appear on the control panel in the plant and input changes with the click of a mouse," Morgan said. "When programmed to do so, FlexMaster can even automatically email system alarms to any email account on a PC, Blackberry, or smartphone."

At the heart of the FlexMaster system is a wall-mounted color touch-screen control. In the basic configuration of the system, this control is hard-wired to as many as five vacuum pumps, 32 material receivers, and 25 purge valves. Expanding the system involves connecting special FlexXpand modules to additional groups of components (at nearby locations to minimize wiring), and then connecting the modules to the FlexMaster controller via a simple communications cable that NOVATEC calls NovaNet. It is possible to add up to 88 more receivers, 15 pumps, and 64 purge valves. FlexXpand modules can also be used to add source and destination connections for material proofing.

"NOVATEC has designed the FlexMaster control system to eliminate the hard upfront decisions that often accompany initial investments," Morgan said. "It provides plastics processors with the assurance that they can always accommodate varying conveying requirements with a relatively small investment in expansion modules and a minimum of additional cable runs."

The PLC-driven FlexMaster color touch screen displays all conveying functions in the form of interactive pictorial icons, personalized descriptive texts, and effective alarm messages. Changes to operating parameters can be made, with assignable levels of security, in intuitive input screens with instant confirmation feedback. The central control can exchange information with up to 23 FlexXpand modules, which can be wall-mounted at locations that minimize wiring.

NOVATEC, INC. is a leading supplier of resin drying, blending, and pneumatic conveying systems to plastics processors. The company specializes in custom-engineered material handling systems that meet specific process and production requirements. Its range of dryers is the broadest in the industry, including desiccant and hot air systems and infrared systems for crystallizing and drying PET, as well as the patented NovaDrier(TM) membrane dryer, the NovaWheel(TM) desiccant wheel dryer, and the NovaVac II(TM) vacuum dryer. NOVATEC, Inc. is headquartered at 222 East Thomas Avenue, Baltimore, MD 21225 U.S.A. Tel: 410-789-4811. Fax: 410-789-4638. Email: sales@novatec.com.
Share