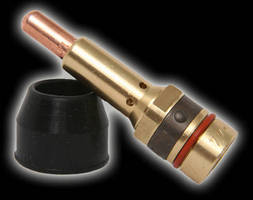 Each TOUGH LOCK(TM) Conversion Series consists of the TOUGH LOCK Consumable System, which is composed of TOUGH LOCK Contact Tips and Retaining Heads featuring the Tregaskiss Dual Taper Technology. This consumable system has a locking feature that prevents the contact tip and retaining head from overheating, reduces wear and extends consumable life. Plus, a dual-lead thread design allows tips to be rotated 180 degrees to create a new wear position that extends the tip life. The Dual Taper Technology offers a second rear taper where the retaining head connects to the gooseneck to lock the connections throughout the length of the MIG gun and help the consumables run cooler.

Combined, the features in the TOUGH LOCK Conversion Series minimize downtime associated with consumable changeover - regardless of the type of MIG gun being used. Each conversion series also includes nozzles and one or more of the following: a new gooseneck insulator and/or an adaptor. Tregaskiss also offers a retainer that allows their innovative QUICK LOAD(TM) Liner to be used in most Tweco-style MIG guns.