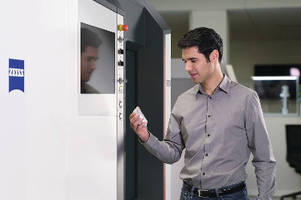 Available with tube voltage of 130 kV or 225 kV and power rating up to 500 W for 225 kV version, ZEISS METROTOM 800 can scan metal components along with mixed materials. ZEISS METROTOM 1500, rated at 225 kV, can scan large components with max height of 700 mm. Workpiece can be raised and lowered by 400 mm and multiple scans can be merged into one volume model. Evaluation software delivers 3D visualizations and section views based on voxel data generated by ZEISS METROTOM OS.

ZEISS Expands the Performance Spectrum of its Computer Tomographs


MAPLE GROVE, Minn., -- These days, the focus is on speed and flexibility when it comes to using computer tomographs (CTs) in industry. That's why ZEISS will introduce two computer tomographs which fulfill these requirements exactly at IMTS (International Manufacturing Technology Show), in Chicago, September 12-17, 2016:  the ZEISS METROTOM 800 with an extended performance spectrum and the new ZEISS METROTOM 1500.

In light of the ongoing development of new materials and the growth in the manufacture of hybrid workpieces made from very different materials, it has become increasingly difficult to clearly separate the application fields of computer tomographs. "Thus companies need machines which can be used in as flexible a manner as possible – including larger and larger measuring ranges," explains Ralf Benninger, Head of Technical Sales and Product Management for Computer Tomography at the ZEISS Industrial Metrology business group.

And there is another trend that is driving the evolution of computer tomographs forward: production processes are speeding up and inspection technology needs to keep pace. Consequently, industry requires increasingly fast and flexible machines. This is exactly where the ZEISS METROTOM 800 with its extended performance spectrum and the new ZEISS METROTOM 1500 come into play.

Effective immediately, companies can choose between a ZEISS METROTOM 800 with a tube voltage of 225 kV and a version with a tube voltage of 130 kV. The significant increase in power from 39 to 500 watts on the ZEISS METROTOM 800 with 225kV offers several advantages. Metal components along with mixed materials, e.g. hybrid workpieces, can be scanned without any difficulty thanks to the enhanced performance. "This significantly expands the machine's application and ensures that the investment is future-proof," says Benninger. And there is another facet that makes this machine attractive: the optimized performance means that components are scanned significantly faster than with the ZEISS METROTOM 800/130 kV.

Operators will also receive information about the entire component with the recently developed ZEISS METROTOM 1500/225 kV. "The innovation behind this machine will be of particular interest to manufacturers of die cast components," says Benninger. Unlike the predecessor model, significantly larger components can be scanned using this machine thanks to the new measuring Z axis. The maximum height of the components used to be 300 mm. Now it is 700 mm. The larger operating volume is the result of two innovations. First, the workpiece can now be raised and lowered by 400 mm instead of 150 mm. Second, multiple scans can be merged into one volume model. Workpieces, such as steering columns and other larger castings, can now be tested noninvasively by using the CT. This is an important requirement for shortening the time needed for initial sampling and accelerating process optimization during production ramp-ups.

The corresponding visualization and evaluation software delivers informative 3D visualizations and section views based on the voxel data generated by ZEISS METROTOM OS. In addition to visualizations, the program also provides information on the shape, size and position of characteristics such as discontinuities and inclusions. Metrological evaluations can also be performed effectively, using ZEISS CALYPSO software.

The interior is always in view

Even though both new machines have a complete enclosure to protect  the operator from X-rays, the interior can be viewed by standing in front of the computer tomograph or at a different workstation. For this purpose, ZEISS has installed a camera and a monitor in every machine. The image from the camera can be displayed on the reconstruction computer to set up the measurement. When preparing the measurement at the workstation, the operator can make sure that there will not be a collision between the component and the detector or tube. The camera image can be viewed on different computers outside of the measuring lab, which is both more convenient and saves time. "By being able to check available machine capacity, operators can report and implement their measuring needs more quickly," says Benninger.