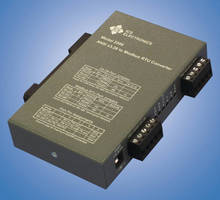 Used for controlling RS-232 and RS-485 Modbus RTU devices, Model 2399 simplifies replacement of obsolete controllers that use ANSI x3.28 protocol without requiring changes to production system. This ANSI x3.28 to Modbus RTU Converter, which offers x3.28 and SCPI operating modes, consists of metal-enclosedÂ unit that can be DIN Rail or panel mounted. It features 2 serial ports that can be set as RS-232 single ended signals and as 2- or 4-wire, RS-485 differential signals.


PLEASANTON, CA –  Today ICS Electronics announced a new ANSI x3.28 to Modbus RTU Converter for controlling RS-232 and RS-485 Modbus RTU devices.  Called the Model 2399, this new converter was designed to simplify the replacement of obsolete Controllers that use the ANSI x3.28 protocol.  Many older production systems were designed with Controllers that use the ANSI X3.28 protocol.  These Controllers are obsolete.  Maintenance on them is expensive and time consuming.  Replacing the old Controllers with new ones has been impractical up to now because the production system would have to be modified to work with a modern Modbus RTU compatible Controller.  The 2399 makes the replacement possible without having to make any changes to the production system.

The 2399 has two operating modes.  In the x3.28 Mode, the 2399 appears as a ANSI device.  All X3.28 commands are converted into Modbus RTU packets and Modbus Controller responses are returned to the host system.  In the SCPI Mode, the 2399 operates as an IEEE-488.2 compliant device and accepts SCPI commands to configure the 2399.  The 2399 also accepts ASCII command strings for controlling any Modbus RTU device which makes it easy to use to test and calibrate the replacement controller.

The 2399 is a small, metal enclosed  unit that can be DIN Rail or panel mounted.  It operates on 5 to 32 Vdc or from an included a 115 VAC power adapter.  The 2399 has two serial ports that can be set as RS-232 single ended signals and as 2 or 4-wire, RS-485 differential signals.  Port 1 is the computer interface port and is used for the ANSI X3.28 protocol communication, the 2399 setup commands, and for controlling Modbus devices with simple ASCII commands.  Port 2 communicates with the Modbus RTU device(s).

The 2399's x3.28 command conversion firmware currently targets a Watlow EZ-Zone controller.  The command set can be expanded to accommodate different system needs or it can be changed to target a different Modbus device.

ICS Electronics has been making Modbus conversion and control products since 1999 and has numerous Modbus interfaces with GPIB and Ethernet interfaces.