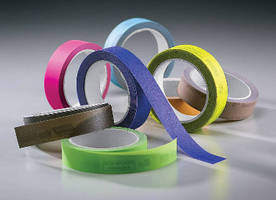 The new Norton Finium line, designated Q351R and Q351S, features either a Rough (R) back or Smooth (S) back film, to meet any application requirement and equipment type. These microfinishing film rolls are used in powertrain polishing operations in the automotive, truck, marine, small engine, and very large engine manufacturing operations around the world. Film rolls are made in extremely fine grit sizes, available in 80 – 9 micron/ì or 180 – 1,000 grit of straight and scalloped edge. The micron size is so fine that it can be difficult to distinguish visibly one from the other, which is critical in selection process. “We have added a color code by grit size as visible identity verification to simplify selection to avoid mistakes inside our customers manufacturing plants”, says Mr. Alexandre Pecora, Product Manager for Film for Saint-Gobain.

The Norton Finium line is manufactured under controlled operations to ensure the highest quality, uniformity and consistency. This line of Coated Abrasive film perfectly complements the Norton lines of Bonded Abrasive (grinding wheels) and Superabrasives (diamond and cBN) products also used in the powertrain markets.

About Norton Abrasives and Saint-Gobain

Norton is a brand of Saint-Gobain. Norton Abrasives is the world’s leading manufacturer of a wide array of abrasive products. For applications ranging from rapid stock removal to precision finishing in all industries, products are offered in BEST, BETTER and GOOD performance/ price tiers for meeting the needs of all end users.  (http://www.nortonabrasives.com/)

Saint-Gobain is the world leader in abrasives and in building materials, and is the only international manufacturer to offer a full complement of abrasives products to customers worldwide.  The company’s abrasives business has more than 16,000 employees and approximately 100 manufacturing facilities in 26 countries. In the United States and Canada, Saint-Gobain’s Abrasives business has 2,800 employees and 15 manufacturing sites.