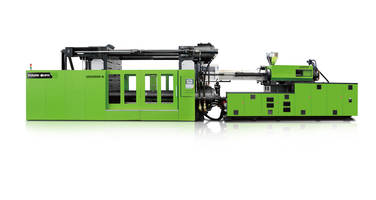 IBERIA, Ohio, April 17, 2018 – Yizumi-HPM Corp., a unit of the Yizumi Group and a leading manufacturer of high-quality hybrid injection molding machinery from 60 to 3500 tons, will announce the launch of three new series of injection molding machines at NPE2018 May 7-11 at the Orange County Convention Center in Orlando, Fla. (Booth #West 3343). The DP-N series two-platen servo hydraulic, A5-N series toggle servo hydraulic, and the FE-N series full servo are all built to North American design criteria and standards and make use of KEBA touch-screen control systems throughout the machine line.

Yizumi-HPM’s three new series are based on HPM designs but utilize the engineering, manufacturing, and financial strengths of Yizumi, one of the world’s leading manufacturers of injection molding machines, according to Bill Duff, General Manager, Sales and Marketing for Yizumi-HPM. “We’ve re-emerged stronger and better from our HPM roots and we’re excited about the momentum we’ve generated in the market,” said Duff. “We believe we’re uniquely positioned to offer the market high-quality technical injection machines that deliver high performance at an affordable cost.”

Yizumi-HPM has introduced the DP-N series two-platen servo hydraulic model UN1200DP-N-12050 (1200 US tons 240oz). At NPE2018, this machine will run a special MuCell “FoamPro” technology, which Yizumi developed with Wilmington, Mass.-based Trexel Inc., the developer of the MuCell foaming process. FoamPro is a “rapid heat, rapid cool” process that creates textured finishes, reducing part weight by up to 20% and required clamping forces by up to 50%.

Yizumi-HPM will demonstrate FoamPro technology with a single-cavity aluminum mold on a UN1200DP-N-12050 two-platen injection press, producing an 880-gram PP briefcase in a 49-sec cycle. The DP-N series boasts a box-shape platen that is designed for high rigidity and high parallelism. Mold closing and opening are controlled by a high-response servo valve with mold-open repeatability up to ±0.1mm. The DP-N series is offered from 550 tons to 3500 tons with a modular design that allows multiple molding solutions.

The company will also offer the FE-N series full-servo electric model FE-N-60 (60 US tons 2oz). This is a new fully electric machine designed for the North American market and is available from 65 to 290 tons. The machine features optimized injection unit structure, servo motor customization, and an optimum lubrication system. The FE-N series is configurable to different sizes with high-speed recovery and fill up to 500 mm/sec. At NPE, the machine will run a small medical part.

The “N” designation indicates the series is developed and configured for the North American market.

Yizumi-HPM Corporation, a unit of China’s Yizumi Group, is a leading manufacturer of high- quality hybrid injection molding machinery from 60 to 3500 tons, and hot and cold chamber die casting machinery from 200 to 4500 tons. HPM has been supplying injection molding machinery and support services to the plastics industry since 1931, and has thousands of injection molding and die casting machines in operation throughout North America. HPM Company was incorporated in 1877 as the Hydraulic Press Manufacturing Company in Mount Gilead, Ohio, with the purpose to design and build hydraulic presses for the extraction of apple cider. HPM started to manufacture hydraulic presses that were used in a number of markets, including textiles, railroads, and food processing.