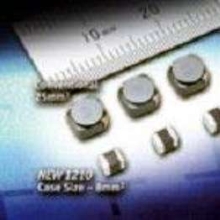 The miniaturization trend in digital cameras, cell phones and other battery-powered portables continues to drive the development of smaller, higher-efficiency components and lower-profile end devices. The choke coil, a key component of the DC/DC converter, is also one of the largest when standard power inductors are used. Though smaller than before, conventional power inductors used in DC/DC converter choke coils remain a miniaturization "bottleneck," preventing further size reduction due to a physical structure that continues to require a relatively substantial amount of PCB mounting space.

In response to the need for smaller power inductors in this application, TAIYO YUDEN developed its CBC3225 line of high-current, wound-chip inductors in 1210 case size. The first in the series, a 760 mA/10 uH device, stimulated significant market interest following its introduction in fall 2004. Subsequent market demand for additional models with expanded high current ratings resulted in the development of a full line of wound-chip inductors that offered designers an unprecedented degree of design flexibility over a range of 270-1440 mA and 1.0-100 uH. Additional models in the CBC3225 series are under development to enable further reduction of the DC/DC converters used in mobile equipment.

A major step forward in meeting the industry's continuing miniaturization trend in cellular phones, digital cameras, PDAs and other ultra-portable electronic devices, TAIYO YUDEN's industry-leading material science expertise and high-precision multi-layering techniques were key to the success of these efforts. The high-current ratings and compact size of the CBC3225 series were the result of a unique structural design that fully optimized the component's performance characteristics by eliminating all space that did not directly contribute to device functionality. For example, the dead-space generated during winding of the ferrite core was optimized to a nearly cylindrical shape that eliminated the wasted space produced by squared-off rectangular surfaces.