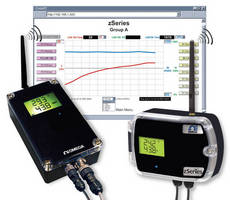 Omega's new products to be featured at the "Sensors Expo & Conference"  Visit us at Booth No. 623 June 5-7 Rosemont, IL  Booth

The End Devices transmit up to 300 feet (without obstructions) to a “Coordinator” connected directly to an Ethernet network and the Internet. The wireless system complies with IEEE 802.15.4 operating at 2.4GHz.

With this new zSeries system from OMEGA, users can monitor and record Temperature, Relative Humidity, and Barometric Pressure over an Ethernet network or the Internet with no special software—just a Web browser.

The device can trigger an alarm if variables go above or below a set point that the user determines. The alarms can be sent by email to a single user or to a group distribution list, including text messages to Internet enabled cell phones and PDA’s.