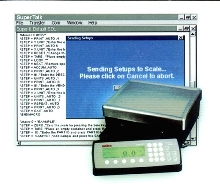 SuperTalk expedites and simplifies data transfer and
management, and enables transfer storage and editing of scale set-ups. Software, which is available on CD-Rom, has capacity to move data files and transaction records from company's Super II scale to any PC, where they can be imported into commonly used spreadsheets and database programs. Applications include material handling, inventory control and packaging.

Setra's SuperTalk has the capacity to easily move data files and transaction records from the Super II scale to any PC, where they can be imported into commonly used spreadsheets and database applications. SuperTalk can also transfer macros to a PC, which may have been written or stored in a Super II scale.
Once stored in the PC, the macros can be easily transferred to other Super II scales to create uniform scale operation at every workstation.

When using Setra's SuperTalk, any and all scale set-ups, such as print formats, set points, special weighing units of measure, and sample size and accuracy set-ups, can be transferred to and stored in a PC. This can provide a back-up if the set-ups in a scale are lost or inadvertently changed.

SuperTalk can also be used for editing set-up information. A macro developed for one work-station and one operator can be modified in SuperTalk for a similar application using a different Super II scale. The SuperTalk kit includes a cable and connector allowing for easy hook up to a Super II scale and PC.
Share