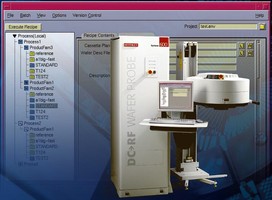 This latest KTE software release represents a continuation of Keithley's commitment to continuous improvement and capital equipment reuse, helping test engineers lower their overall cost of test. Keithley is evolving its capabilities to meet the changing demands these customers increasingly are facing, such as more complete testing earlier in the process and acquiring statistically significant RF data sets for model calibration.

Keithley's KTE is a powerful wafer test development and execution environment that guides test engineers through the development of a test plan. Users can create individual electrical tests at the subsite level by drawing on pre-defined libraries of test, then defining parameters and connections.

KTE V5.2 is designed to work with Keithley's Series S600 Parametric Test Systems. The Series S600 is used in a wide range of tests, including process control, process and equipment tuning and optimization, wafer testing, and device modeling and characterization. The S600 has been in use for more than five generations of technology nodes within the semiconductor industry, a span of time that leads the industry with its record of capital equipment re-use that enables customers to lower their cost of test.

Among the most significant enhancements to the KTE V5.2 release are improvements in parallel test support. Parallel test has become a prime method for improving throughput and reducing cost of semiconductor test by allowing users to acquire more data in the same test time during process development or the same amount of data in less time during volume fabrication. New features included in the KTE V5.2 release include fully audited support for PT_Execute, a software routine that allows quick evaluation of parallel versus serial test. Older evaluation methods involved complicated user guidebooks that consume time and engineering resources. PT_Execute can be run in a few short keystrokes, which drastically shorten engineering development time and reduce overall cost of ownership. Another enhancement is FMI (Force-Measurement Interlock), a combined firmware/software solution that reduces crosstalk, noise, and measurement variability of test results.

The RF test enhancements in the new KTE V5.2, which include improved LRM calibration, are much more useful than existing techniques and unlike any comparable offering in the market today, because they enable correlated measurement and calibration in a production environment. These enhancements complement Keithley's S680 Parametric Test System with RF measurements, which can take precise DC and RF measurements simultaneously, making it suitable for both lab and production use.

Keithley's KTE V5.2 also features improved support for embedded instrument sub-systems in ways designed to boost overall system test throughput. The system optimizes a variety of new sub-systems, including a new LCR meter that improves capacitance measurement throughput by up to 2X, a spectrum analyzer (increasingly being used for benchmark circuit analysis), and Keithley's Series 3400 Pulse/Pattern Generators. The Series 3400 Pulse/Pattern Generators meet the increasing need for pulse testing in advanced semiconductor device characterization and material research. These applications are driven mainly by the ongoing reduction in device size and increase in operating speeds of many electronic components and materials.

Improved Ease of Use

For More Information. For more information on Keithley's KTE V5.2 test environment, or any of its semiconductor test solutions, visit www.keithley.com/pr/067 or contact the company at:

About Keithley Instruments, Inc.
With 60 years of measurement expertise, Keithley Instruments has become a world leader in advanced electrical test instruments and systems from DC to RF (radio frequency). Its products solve emerging measurement needs in production testing, process monitoring, product development, and research. The company's customers are scientists and engineers in the worldwide electronics industry involved with advanced materials research, semiconductor device and wafer characterization and functional test, and the production of end products such as electronic assemblies or portable wireless devices. The value Keithley provides its customers is a combination of precision measurement technology and a rich understanding of their applications to improve the quality, throughput, and yield of their products.