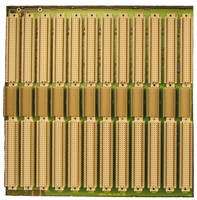 Offered in high-power, pluggable, and standard versions, VME64x (VME64 extensions) backplanes come in 6U (typ) height and offer various slot sizes with power bugs above and below slots. To meet VITA 1.7 Increased Current specification or high-power VME applications, 6.5U high backplanes feature extra power bugs on bottom of board. Another power option for VME-based systems is to use pluggable 47-pin connector, which can be implemented in vertical-mount backplanes parallel to signal slots.

VME64x (VME64 extensions) backplanes typically come in a 6U height. Pixus offers 6U VME64x backplanes in various slot sizes with power bugs above and below the slots. To meet VITA 1.7 Increased Current specification or high-power VME applications, Pixus also offers 6.5U high backplanes with extra power bugs on the bottom of the board. The backplanes feature automatic daisy chaining, chassis ground connections, and a 10-layer (typical) multilayer construction. They also have a utility connector for sense, fail, reset, and ground signals.

Another power option for VME-based systems is to use a pluggable 47-pin connector. These can be implement in vertical-mount backplanes parallel to the signal slots. Or, the PSU connectors can be incorporated in horizontal-mount backplanes, extending outside of the card cage in a 9U monolithic format. This is also a common configuration for CompactPCI SlimBox backplanes. Pixus offers 9U VME64x backplanes in the horizontal format in 2-8 slot sizes.

The Pixus Backplane Division also offers backplanes in OpenVPX, CompactPCI, PCIe, ATCA, and custom designs. Pricing for the VME64x backplanes start under $200.00 depending on size, quantity, and options. The lead time is stock to 4 weeks.

Link to the datasheet: http://www.pixustechnologies.com/assets/VME64x-Backplane-Datasheet.pdf

About Pixus Technologies
Leveraging over 20 years of innovative standard products, the Pixus team is comprised of industry experts in electronics packaging. Founded in 2009 by Senior Management from Kaparel Corporation, a Rittal company, Pixus Technologies' embedded backplanes and systems are focused primarily on ATCA, OpenVPX, PCIe and custom designs. Pixus also has an extensive library of VME-based and cPCI-based solutions. In May 2011, Pixus Technologies became the exclusive North and South American supplier of the electronic packaging products previously offered by Kaparel Corporation and Rittal. Pixus Technologies is actively involved in the continuous development of leading AdvancedTCA, OpenVPX, and cPCI/PCIe products that will surpass all data transfer and cooling challenges.
Share