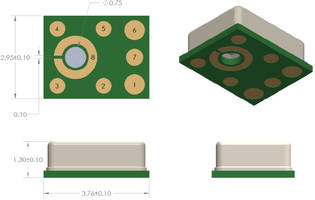 Vesper, developer of the world’s most advanced acoustic sensors, today introduced the VM2000, the only MEMS microphone that maintains high system performance over the life of a product. Targeting voice-activated systems such as smart speakers, smart home and Internet of Things (IoT) products - which use microphone arrays to enhance voice capture and clarity - the VM2000 solves a critical need for stable, reliable and accurate microphone arrays that do not degrade over time.

“The growth of voice-enabled smart speakers - which use up to seven microphones per device - as well as smart home automation systems and diverse IoT products is spurring demand for MEMS microphone arrays,” said Matt Crowley, CEO, Vesper. “The problem with capacitive MEMS microphones, however, is that they degrade over time when exposed to contaminants. If one microphone in the array drifts or gets wet, dirty or dusty, the entire microphone array will fail, severely limiting acoustic system performance and far-field accuracy. Only piezoelectric MEMS microphones such as the VM2000 remain stable and reliable throughout a product’s lifetime. This ensures long-term acoustic performance of voice-activated systems built with Vesper microphones.”

As with all Vesper microphones, the VM2000 is a piezoelectric MEMS device that is natively immune to environmental contaminants such as dust, water, humidity, oil, particulate matter and shock. This level of environmental robustness further contributes to the reliability of the company’s microphones. In addition, only Vesper microphones are immune to stiction, which can cause catastrophic system failure.

The VM2000 has a small 3.76 mm X 2.95 mm X 1.3 mm package. It is reflow solder-compatible with no sensitivity degradation. The VM2000 is currently sampling and will be in volume production in Q1 2018. For more information on the VM2000, please email: info@vespermems.com.

Vesper is a privately held advanced sensor company based in Boston, Mass. With origins at the University of Michigan, Vesper’s award-winning microphones are driving a new era of pervasive voice interfaces and acoustic event-detection products via a proprietary piezoelectric MEMS technology. For more information, visit www.vespermems.com