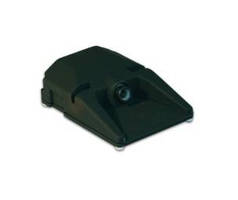 The camera is launching on a number of compact C and D segment sedan and crossover vehicles in Europe, North America and Asia through the end of 2015. Offering six times the processing power of previous generation cameras, the technology offers functions including traffic light detection, large animal and general object detection, and automatic emergency braking for pedestrians at night.

"Now in its third generation, our video camera is a highly sophisticated, proven technology which can enable important safety decisions and provide a strong base platform for active safety systems when combined with other sensors and actuators."

Meanwhile, the fourth generation S-Cam 4 family - which will feature Mobileye's EyeQ4 chip - is scheduled to launch in 2018 and has been designed to meet the requirements of automated driving functions. It comprises a single lens, mono-camera version and a premium three lens version which adds a telephoto lens for improved long distance sensing, and a fish-eye lens for improved short range sensing. The new camera generation was recently chosen by a major European manufacturer across a range of its vehicle platforms.

Whydell concluded: "TRW has been developing driver assist systems for many decades and is recognized as a leader in camera and radar systems alike. We offer scalable and affordable solutions for our customers across the globe to help them meet new legislative requirements and achieve maximum NCAP ratings."

ZF is a global leader in driveline and chassis technology as well as active and passive safety technology. The company, which acquired TRW Automotive on May 15, 2015, is now represented at about 230 locations in some 40 countries. The two companies, which were still independent in 2014, achieved a sales figure exceeding EUR30 billion with 134,000 employees. As in previous years, both companies have invested approximately 5 percent of their sales in Research and Development (recently EUR1.6 billion) in order to be successful with innovative products. ZF is one of the top three automotive suppliers worldwide.