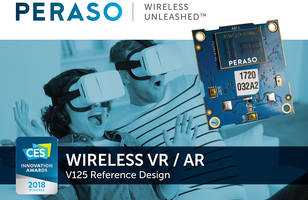 "Going wireless solves one of the biggest challenges with VR, which is giving users a completely unencumbered, free-moving experience," said Anshel Sag, analyst at Moor Insights & Strategy. "WiGig makes this possible, while delivering significant performance advantages that make it a natural choice for wireless VR – both today and in the future.. This is why we expect to see WiGig VR starting to take off in 2018, and this is an early example of that."

"VR momentum is growing, and cutting the cord is the obvious next step in delivering the experience that was always intended, allowing users to move naturally and freely in virtual worlds with absolutely no degradation in performance," said Ron Glibbery, President and CEO at Peraso. "When VR is finally untethered with WiGig, this promise becomes a reality, and the possibilities for consumer and enterprise VR use cases are endless. Our sole focus as a pure-play 60 GHz chipset provider is to build a high-performance WiGig VR ecosystem for users, and we're working with headset and consumer electronics manufacturers globally that have integrated our V125 platform to do just that, with products that will be announced in 2018."

Peraso will be demonstrating their wireless VR solution, along with a host of other WiGig applications, at CES 2018 in their suite at the Westgate, January 9th - 12th. To arrange a private demonstration, please contact mdenicola@perasotech.com.

Peraso is a fabless semiconductor company headquartered in Toronto, Canada. The company is focused on the development of 60 GHz chipsets and solutions compliant with the IEEE 802.11ad specification. 60 GHz has been adopted for interoperability certification by the WiFi Alliance under the WiGig® brand. For more information, visit www.perasotech.com.