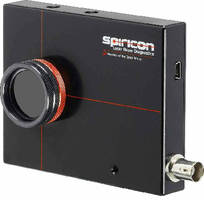 Designed for laser beam measurement applications, Models SP503U and SP620U accurately capture and analyze wavelengths from 190-1,550 nm, both continuous wave and pulsed mode. Cameras have resolution of 640 x 480 pixels and 1,600 x 1,200 pixels, respectively. Able to synch up to 1,000 Hz, built-in photodiode trigger includes firmware that analyzes background lighting and provides offsets, allowing triggering on variety of energy levels, including energies down to 10 ÂµJ.

The SP camera's built-in photodiode trigger includes new firmware that analyzes background lighting and provides offsets, allowing reliable triggering on a variety of energy levels, including energies as low as 10uJ. The internal photodiode trigger also includes a pre-trigger function that predicts when the next pulse will arrive and opens the shutter in time to see short, ns pulses.

"The new built-in photodiode trigger for the SP cameras is the most sensitive in the industry," stated GaryWagner, President of Ophir-Spiricon Inc. "It can be triggered from something as low contrast as reflected light around a lab setup. This means a user can set the camera up in front of a pulsed laser, turn on the beam profiling program, and capture scattered laser light at even the most challenging nanosecond pulse widths."

Ophir-Spiricon provides the only photodiode triggers in the industry. Two options are
available: the new SP cameras' built-in trigger that can synch up to 1000Hz, and an external trigger than can synch to 500Hz. If the lab setup is such that scattered light from the laser does not get to the built-in photodiode, the external photodiode trigger can be used and placed in a different location from the camera.

Ophir-Spiricon's SP cameras feature the highest dynamic range in the industry, up to 64dB, and a programmable, high-speed electronic shutter. The new beam profiling cameras include the easy to setup, easy to use USB 2.0 interface. They are available in two, ultra-slim versions: the SP503U has a resolution of 640 x 480 pixels, and the SP620U has a resolution of 1600 x 1200 pixels, over 1.9 million pixels, the highest in the industry. Both cameras include a set of filters that allow for effortless measurement of power levels, from microwatts to watts, when used in combination with the automatic shutter and gain control.

The cameras also include the industry's most advanced beam analysis software, Ophir-
Spiricon's LBA, BeamStar, or BeamGage(TM). BeamGage, the next generation of laser beam
analysis systems, is the industry's first beam profiling software to be newly designed, from scratch, using the most advanced tools and technologies. Based on UltraCalTM, Ophir- Spiricon's patented baseline correction algorithm that helped establish the ISO 11146-3 standard for beam measurement accuracy, BeamGage provides high accuracy results, guaranteeing the data baseline (zero-point reference) is accurate to 1/8th of a digital count on a pixel-by-pixel basis.

The SP503U and SP620U USB 2.0 CCD cameras are available now. Both cameras include the
new built-in photodiode trigger and a choice of beam analysis software packages: LBA, Beam-Star, or BeamGage. OEM pricing is provided on request.

Established in 1978, Ophir-Spiricon is part of the Ophir Optronics Laser Measurement Group. The Laser Measurement Group provides a complete line of instrumentation including power and energy sensors, beam profilers, and spectrum analyzers. Dedicated to continuous innovation in laser measurement, the company holds a number of patents, including Ultracal(TM), the baseline correction algorithm that helped establish the ISO 11146-3 standard for beam measurement accuracy.