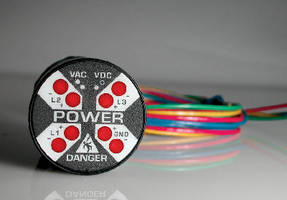 Providing solid-on LED lighting and alert capabilities, UPA-130S Series minimizes risk of electric arc flash by pre-verifying electrical isolation from outside of control panel before re-verification with meter. Series operates over range of 40-750 Vac line-to-line or ground-to-ground, is phase insensitive, and offers surge immunity protection. When hardwired to load side of circuit breaker or main disconnects, UPA-130S series detects stored hazardous AC and DC voltage in any individual phase.


Newell, West Virginia, USA - The Diversified Electronics division of Marsh Bellofram Corporation (www.marshbellofram.com), a member of the Marsh Bellofram Group of Companies, has announced the global market introduction of the UPA-130S series. This newest addition to the popular Marsh Bellofram UPA-130 series, the "S" model, is designed to provide solid-on LED lighting and alert capabilities for those monitoring applications requiring enhanced NFPA70E and OSHA safety compliance, instead of the flashing LED's found on the standard model.

The UPA-130S series is designed to reduce the risk of electric arc flash by pre-verifying the electrical isolation from outside of a control panel before its re-verification with a meter. The series operates over a standard range of 40 to 750 VAC (30 to 1000 VDC) line-to-line or ground-to-ground, is phase insensitive and offers high surge immunity protection. When hardwired to the load side of a circuit breaker or main disconnects, the UPA-130S series detects stored hazardous AC and DC voltage in any individual phase. After disconnecting power to an enclosure, electricians can pre-verify voltage isolation while an enclosure door is still safely closed. The compact, UPA-130S series offers a potted construction with six-foot leads and is designed to fit a 30mm knockout. Its design includes redundant circuitry and the incorporation of long-life display panel LEDs for extended use, with components housed in NEMA 4X, 12 and 13 electrical enclosures.

The UPA-130S series is a reliable safety tool for pre-verification of the presence or absence of residual electrical power or charges, or as a zero energy indicator, both before or during mechanical lock out/tag out (LOTO) procedures. It is particularly ideal for use in government project applications, which are typically characterized by more stringent requirements for solid LED lighting, to avoid triggering certain medical conditions that can result from visual exposure to rapidly flashing lights. The UPA-130S series is also ideal for use in applications such as circuit breaker disconnects, as well as with NFPA 70e Category III and IV high energy panels; or as an added electrical safety tool on other types of frequently accessed electrical panels. In addition to its hazardous area certifications, the UPA-130 is also compliant to CATIII and CATIV standards, and is CE marked and UL-approved in both the US and Canada. For more information about the UPA-130S Universal Power Alert or other products available from Marsh Bellofram, please visit www.marshbellofram.com.
Share