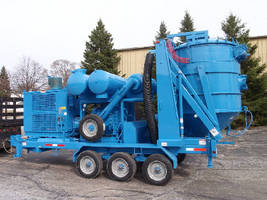 The VecLoader Titan 6100 HP's 28" Hg vacuum allows great job flexibility when conveying longer distances or dense waste streams such as steel grit. The VecLoader Titan 6100 HP feature a 72" self-pulsing baghouse with 61 filter bags, allowing for continuous operating without the need for a vacuum box or periodic shutdown for filter cleaning. The VecLoader filtration system has been validated by numerous safety, environmental and hygienic personnel, insuring the highest level of safety and environmental compliance.