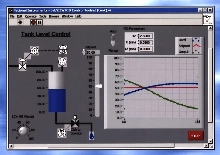 With new features in the LabVIEW PID Control Toolset 6.0, engineers dramatically reduce development and maintenance time while preserving system flexibility. Instead of programming an individual function for each control loop, engineers now can control multiple PID loops with a single function while maintaining individual set points, process variables, and PID gains for each unit.

The latest version of the LabVIEW toolset also includes built-in tools for control system prototyping, delivering a single solution for simulating and testing custom-built control systems, such as the electronic control units for automatic automobile transmissions. With these new tools, engineers also can easily implement advanced algorithms to quickly build customized test systems for control systems. For example, engineers in industries such as automotive and aerospace can use these system prototyping tools to build hardware-in-the-loop simulation systems, which demand high performance and advanced functionality.

The LabVIEW PID Control Toolset applies the rapid development of LabVIEW to PID control, speeding the creation of these applications. By combining PID, fuzzy logic, and advanced control functions in this toolset with the math, logic, and I/O connectivity functions in NI LabVIEW, engineers can quickly develop sophisticated applications for automated control.

About NI
NI leverages commercial technologies, such as industry-standard computers and the Internet, to deliver customer-defined measurement and automation solutions. Headquartered in Austin, Texas, NI has more than 2,800 employees and direct sales offices in more than 35 countries. NI increases the productivity of engineers and scientists worldwide by delivering easy-to-integrate software and modular hardware. For the past three consecutive years, FORTUNE magazine has named NI one of the 100 best companies to work for in America.