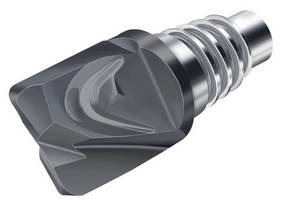 Waukesha, WI -- Walter USA, LLC has announced several new additions to its Walter Prototyp ConeFit(TM) modular solid carbide milling system. Prominent among these are the spade-type changeable cutting heads. These insert-like compression molded cutting heads, called "spade type" because of their double-edged, spade-like shape, are particularly suited for copy and plunge milling, chamfering, centering and spot-facing holes, as well as virtually any application where large chip clearance is needed. They are well suited for applications which require only two cutting edges, and for use with two-flute cutters.

Also new to the ConeFit(TM) line are products specially developed for graphite machining, making Walter Prototyp the only supplier currently offering a changeable head milling system for graphite machining. Its PCD coated N50 variants are available as four-flute cutters with corner radius and as a double-edged, ball-nose end mills.

The third new addition to the ConeFit(TM) system is the Protoomax(TM)ST high-performance end mill for maximum metal removal during the roughing and finishing of steel, including stainless. A four-flute variant, with and without corner radius, is now also available with ConeFit(TM) interface.

As an overall tooling system ConeFit(TM) combines a VHM changeable milling head with a steel toolholder. However, VHM toolholders and mono-block adaptors with HSK63, SK40 or Capto C5 and C6 are also available. The cone-shaped adapter consists of a precision cone with a patented self-centering thread. Diameters range from 3/8" to 1" (10-25 mm). The tooling system is universal and can be used for virtually any machining application.

Walter USA, LLC offers an extensive line up of cutting tools for milling, drilling, turning, boring and specialized tooling for unique applications through its competence brands Walter Valenite, Walter Titex and Walter Prototyp. As well as multi-level service programs through its Walter Multiply brand. Headquartered in Waukesha, Wisconsin the company has a strong network of distributors and field engineers across North America. The Walter name is synonymous with productivity, thanks to more than 80 years of developing cutting tools and inserts that set new standards in production. Walter USA, LLC combines over 75 years of U.S.-based tooling production with long-standing traditions of quality and innovation.
Share