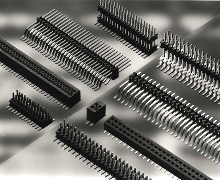 Micro pitch pin and socket connectors work in micro/miniature applications. Square terminals mate with dual beam Tiger Claw or single beam Tiger Beam contacts. The 0.0315 in. system includes FTE Series headers and AW Series stackers which provide board spacings from 0.0197 to 0.355 in. when mated with CLE Series sockets. The 0.0394 pitch system has FTM Series headers and MW Series stackers with spacings from 0.137 to 0.365 in. when mated with CLM or MLE Series sockets.

The .8mm (.0315") system includes headers (FTE Series) and stackers (AW Series) which provide board spacings from 5mm (.0197") to 9mm (.355") when mated with CLE Series surface mount sockets. The dual row interconnectors have up to 90 pins per row for pinout densities as high as 350 per square inch of board space.

The 1mm (.0394") pitch system also includes headers (FTM Series) and stackers (MW Series) with board spacings from 3.5mm (.137") to 9.25mm (.365") when mated with CLM or MLE Series sockets. Both systems include right-angle headers for perpendicular board interface applications. Pricing begins .08¢ - .10¢ per mated line.