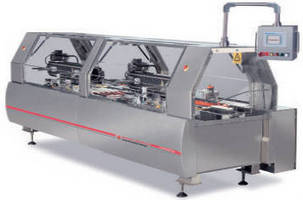 With its servo motor-operated lift-and-descend feature, IL120 Carton Closer enables infeed and outfeed section overhead conveyors to safely raise vertically if carton jam or stoppage is detected. Overhead conveyors safely descend after incident is cleared, and closer restarts. This improves operator access from both sides of machine, which is capable of closing up to 120 cartons/min and can be provided to in inline as well as right-angle configurations.

Bradman Lake at the PackExpo 2010

The IL120 Carton Closer (known formerly as the Compact 3), has been redesigned to incorporate a servo motor operated "lift and descend" feature which enables both infeed and outfeed section overhead conveyors to safely raise vertically if a carton jam up or stoppage is detected.

After the incident is cleared the overhead conveyors safely descend and the closer restarts. This feature replaces the manually operated pivot and latch method used previously. It significantly improves operator access from both sides of the machine. The machine has the capability of closing up to 120 cartons per minute and, as before, can be provided to customers in both in-line and right angle configurations to suit different plant layout requirements. Bradman Lake also plans to offer this new design feature in their low speed and high speed closers.

For the Bradman Lake Group, the introduction of the new IL120 Carton Closer represents another tangible sign of their commitment to continuous product development to meet the customers' requirements.