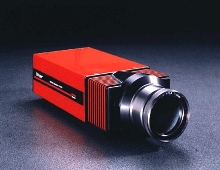 Niles, IL - In the production of backlights (rear windows for automobiles) quality of product, long-term durability of defroster grid, and throughput directly influence production and product costs. IRCON has announced a new system that will directly reduce backlight costs to the automobile manufacturers - The IRCON Thermal Grid Inspection System.

The new IRCON Thermal Grid Inspection System makes use of advanced thermal imaging technology to look for breaks and hotspots in the backlight grid. A typical inspection of the glass backlight can be done in only two seconds; much quicker then traditional thermocouples or other testing methods. The Line Checker feature of the Thermal Grid Inspection System detects broken grid lines that aren't generating enough heat to be considered good. The Hot Spot feature locates hot spots that are associated with a neck-down or thinned out grid line. This system - designed for the automotive, glass, aerospace and aircraft industries - includes software that works in conjunction with the IRCON Stinger, a radiometric digital thermal imaging camera that provides high quality, real-time video temperature representation of process control applications.

By using the Thermal Grid Inspection System, automobile manufacturers save by reducing product cost, post sale warranty and incoming inspection/handling costs. For the automotive glass suppliers, the savings are focused on reduced production costs through more rapid inspections and greater reliability of inspections, which leads to less reordering due to incorrect scrapping of good product. The manufacturers who worked with IRCON on the development of this product have realized a return on investment in fifteen weeks.