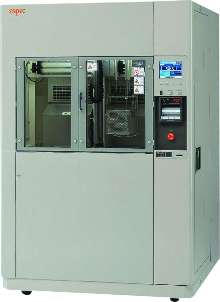 Model TSB-21 tests up to 2.2 lb of ICs to Mil-Std 883, while Model TSB-51 tests up to 4.4 lb. Hot bath temperature can be set to 392Â°F, while cold bath temperatures go as low as -86Â°F. Chambers integrate fluid recovery system to reduce perfluoropolyether fluid consumption, separation filter to remove water from thermal fluid, and refrigerated cooling ring to limit evaporative losses. They use ozone-friendly HFC refrigeration circuit and include programmable, touchscreen controller.

The new chambers reduce perfluoropolyether fluid (brands include Galden and Fluorinert) consumption by up to 65% by integrating a fluid recovery system. The TSB-51 model, for example, uses 1.4 grams of fluid per test cycle, compared to 3.9 grams per test cycle for the prior model. For a 1,000 cycle test, the fluid cost is US $ 150, compared to $ 420 for the prior model. The savings are even more significant for users of older chambers that have no fluid recovery systems.

"We've heard about users without recovery systems on their liquid thermal shock chamber spending up to $ 20,000 a year to replace fluids," says Allyn Arendsen, Sales Administrator with ESPEC. "With the new TSB series, our clients are expecting fluid replacement to be less than $ 1,500 a year. We think that the dramatically lower operating cost will make this type of test worth reconsidering to improve semiconductor packaging."

The recovery system reduces fluid loss through enhanced airtightness, preventing leakage of evaporated thermal fluid from the test area. A fan draws air to a condensing coil that turns evaporated fluid into a liquid, returning it to the baths. The units also include a separation filter for removing water from the thermal fluid. A refrigerated cooling ring at the top of the hot bath helps limit evaporative losses.

TSB-series chambers use a new ozone-friendly HFC refrigeration circuit that reduces energy consumption, saves space, and reduces weight, compared to prior models. Improvements in the refrigeration design have reduced power consumption by 52%, and noise levels to as low as 61 dB. The refrigeration change also reduces chamber footprints more than 15%, while cutting weight.