Minneapolis, Minn. - July 31, 2019 - As the brief three-month Antarctic summer fast approaches, graduate students, post-doc researchers and professors from the University of Minnesota (UMN) push forward with final assembly of BICEP Array in preparation for its new home, the South Pole.

The BICEP Array telescope is part of the cosmic microwave background (CMB) polarization experiment that will begin observations from the Amundsen-Scott South Pole Station in early 2020. DSTI's involvement within the CMB program first began in 2014 when they partnered with Harvard University on a rotary union for BICEP3.

In a location where temperatures often drop to -100° F, you wouldn't think keeping the telescope's internal components cool would be a concern - but think again. The detectors and sensors within the telescope require cryogenic temperatures to operate. For this, each of the four receivers rely on a helium pulse-tube cryocooler for plummeting temperatures to 4 Kelvin (-452° F). A rotary union is required at both rotating axes as a means to safely transfer helium from each cryostat to the compressor located on the floor.

"We partnered with DSTI because we found they had the capability and unique experience of delivering a rotary union designed for helium gas," said Pryke.

Pryke discussed the telescope's application requirements with DSTI and the importance of the rotary union and its ability to keep leak-rate at a minimum due to the limited resources of ultra-high purity helium at the South Pole.

To ensure DSTI delivered on their promise, they partnered with a world-leading seal manufacturer to design a specialized spring-energized lip seal best suited to achieve the lowest possible leak rate based on media type and operating parameters. The custom lip seals are used on the two outermost passages with return lines attached and routed back to the helium's storage tank; preventing any leaks from reaching the outside environment.

"Our relationship with the seal manufacturer, experience with complex applications in high-risk industries such as aerospace and defense, and the lessons learned from BICEP Array's predecessor BICEP3, gave us the confidence and know-how to develop a solution that checked all the boxes for the BICEP team," said DSTI Sales Engineer Jeremy Weigel.

Looking ahead to November, winter-over engineer Nathan Precup and a large group from the BICEP team will make the 10,000-mile journey to Antarctica where they'll spend the summer months decommissioning the Keck Array and installing the new telescope in its place. Once up and running, Precup will remain on-site and operate the telescope through its first observing season.

BICEP Array is fitted with four powerful receivers and more than 30,000 detectors for achieving higher resolution maps and greater sensitivity levels. Similar to the media lines, the electrical and data wires are routed through the rotating axes by the use of an electrical slip ring. DSTI integrated a custom slip ring into the end of each rotary union capable of transferring power, signals and data with speeds upwards of 1 Gbps.

To date, the BICEP/Keck collaboration has published the deepest and most sensitive maps of the polarized CMB composed of 13 years of data. However, each Bicep Array receiver will be able to independently reach our current sensitivity in only 1-2 years of operation and 10 fold in a matter of four years. This represents a massive increase in observing power and the ability to probe the earliest instances of the Universe.

"The data this telescope is capable of collecting allows us to detect the strength of the gravitational waves that are theorized to have been produced by inflation moments after the big bang," said Precup.

To see the latest progress on the build, visit: biceparray.wordpress.com/blog. 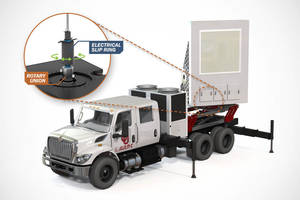 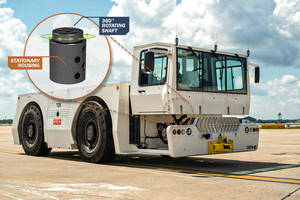 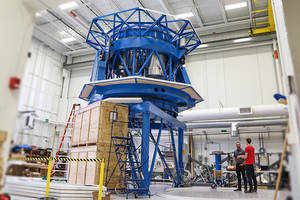 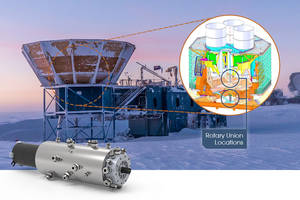 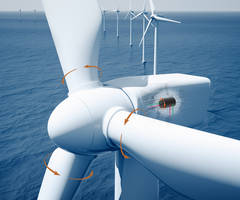 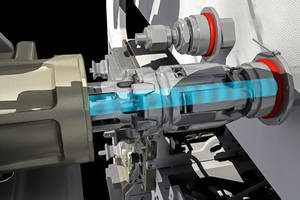