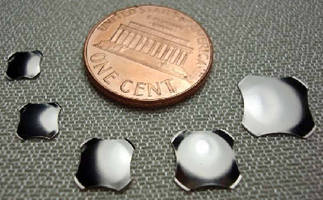 Made of stainless steel, GX-Series has 4-leg design that allows forces up to 900 g (12 mm dia GX12900) to be achieved while maintaining long-life specifications. Series starts with 3 mm dia GX05300, rated for 300 g max, and can be used anywhere momentary switch with tactile feedback is required. Common substrates include PCBs, flex circuits, and membrane applications. Switching voltage, current, and capacity are .1-50 Vdc, .005-100 mA DC, and 1 W, respectively.

The maximum force a tactile dome can achieve is dependant on the dome diameter (or size). As a basic design rule, the smaller the dome diameter, the lower amount of actuation force that can be achieved before the life is compromised. For example, previous 4-leg designed domes that are 6mm in diameter with 300g activation force achieved 10,000 cycles. With the new GX-Series design, over 400g of force can be achieved in a 6mm size while still maintaining 5 million life cycles.

GX tactile domes come in sizes as small as 5mm in diameter, which are ideal for consumer electronics due to the increasing miniaturization of these devices. A single GX dome can also replace applications where multiple domes are stacked to achieve higher actuation forces.