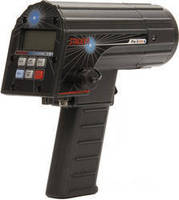 With speed range of 0.2-18 m/sec from below 1 mph to over 40 mph, Stalker Pro II surface velocity radar is designed for measuring flow in rivers, streams, and other bodies of water. It can automatically adjusts its speed reading based on angle, radar points at target flow. Device features vertical angle accuracy of Â±2Â° and vertical angle resolution of 1Â°. It can also measure in cm/sec, ft/sec, and km/hr.

The Stalker Pro II Surface Velocity Radar draws upon Stalker's 19 years of radar speed measurement experience and its 22 accumulated patents in the industry. In addition, Stalker Radar's manufacturing process is registered to ISO9001:2000.

The Pro II SVR features a rugged cast-metal exterior and the world's most sensitive transmitter/receiver as well as miniaturized and modernized electronics. Its direction sensing software and updated algorithms position the Pro II as a new-generation radar ideal for the task of accurate and reliable water flow measurement. Moreover, the Pro II's Ka Band performance measuring water flow is superior to the K Band used by other radars.

To make Pro II Surface Velocity Radar better suited for the different elevated perspectives in comparing water flow at different times or locations, Stalker Radar engineers developed automatic vertical tilt compensation. Simply put, Stalker's SVR automatically adjusts its speed reading based on the angle the radar points at the target flow. With a vertical angle accuracy of ±2° and vertical angle resolution of 1°, if an operator takes one reading pointing down at 45°, then takes another at 50°, both flow readings will be adjusted and directly comparable.

The Stalker Pro II SVR has a speed range of 0.2 m/s to 18.0 m/s - from below 1 mph to over 40 mph - with an accuracy of ±0.1 m/s. In addition to meters/second and mph, it also measures in centimeters/second, feet/second, and kilometers per hour.

Utilizing a state-of-the-art Digital Signal Processor (DSP), Stalker Pro II Surface Velocity Radar provides a level of performance, convenience, and accuracy previously unavailable. The DSP performs the critical filtering and timing functions required for speed measurement in its software, as opposed to hardware. This provides less unit-to-unit variation, more reliable performance, and easier maintenance. One unique feature is that it can be upgraded in the future by simply installing new software, preventing obsolescence.

Applied Concepts, Inc., dba Stalker Radar, was formed in 1977 and introduced the first law enforcement Stalker Radar in 1990 and the first sport radar in 1995. Stalker Radars have become the dominant Doppler radar systems in both fields and continue to lead the radar industry in technology breakthroughs and product innovations. Stalker team members have been involved in almost every significant radar-based product development since 1970.
Share