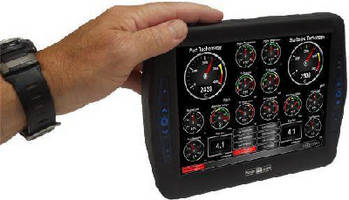 
CLEARWATER, Fla. -- Small PC, of Clearwater Florida, has introduced its new SunVu-85 LCD display with Multi-Touch Technology. The SunVu-85 is specifically designed for Marine and Vehicle applications with a water resistant chassis and an optically enhanced display for excellent readability in direct sunlight.

Mike Bebjak, Small PC's Customer Support Manager, says "We tested and reviewed various methods and technologies for improved LCD sunlight readability and our new 8" solution is the best I have seen."

The SunVu-85 comes complete with an All-In-One cable for easy installation and setup. Standard Video Inputs include HDMI, VGA and Composite. The PCT (projective capacitive touch) interface uses a standard USB connection. Typical operating power is less than 8 watts and the unit supports a DC range input of 9-32V. Mounting is simplified using the included dash/desktop bracket or any standard VESA mounting arm.

Although the SunVu-85 has been designed for Marine applications, it is also well suited to other applications and industries such as transportation, public safety, utility, military and industrial automation. Installation examples include boats, police vehicles, helicopters, ambulances, fire trucks and outdoor kiosks.

As well as the 8" model, the SunVu Series of Rugged Marine/Vehicle displays is available in sizes of 7" to 24", with or without an integrated touch screen. The SunVU series is also available in a PC version that includes an integrated Intel® i3/i5/i7 Computer providing a rugged and sunlight readable LCD-PC solution.

SmallPC.com, a division of ICI Controls, Inc., was formed in 1993. Small PC designs and manufactures computers with a focus on rugged computer solutions.