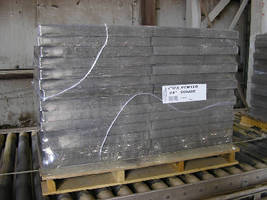 Available as enhancement to Octopus line of stretch wrap equipment or as retrofit to most existing machines, Tail Tucker works by tucking film tail behind last 2 full webs of film, ensuring that no loose film tails occur on stretch wrapped pallets. Unit prevents pallets from coming unraveled due to weather or handling and eliminates need to re-wrap pallets or manually affix tails.

Tuck in That Film Tail

Arlington Heights, IL - ITW Muller, a leading manufacturer of both innovative stretch wrap equipment and high quality stretch wrap film, introduces the Tail Tucker. The patented technology behind the Tail Tucker ensures that no loose film tails occur on stretch wrapped pallets. That means manufacturers and suppliers can rest assured their pallets won't come unraveled due to weather or handling.

Stretched wrapped loads are typically secured through a heat seal technology or are manually affixed. In both instances, the end or "tail" of the film has a tendency to come loose, especially if the load is in contact with wind or rain - unraveling the film entirely and degrading the load. In addition, excess waste and costs are associated with having to re-wrap the pallet.

"Our customers' pallets are exposed to severe weather conditions or left in inventory yards for weeks and months at a time," said Dan Schmidt, Business Development Manager, ITW Muller. "The Tail Tucker has kept their loads secure through it all - saving them time and money."

The Tail Tucker is available as an enhancement to the ITW Muller Octopus line of new stretch wrap equipment or as a retrofit to most existing machines. It works by literally tucking the film tail behind the last two full webs of film. More specifically, the tail tucker arms extend down prior to the last three wraps of the cycle and are wrapped along with the load by two full webs of film. During the last ½ revolution in the cycle, the 20" web of film is formed into a rope. The rope is then captured by the tail tucker arms, cut and held in one arm to begin the next cycle. The remaining cut end of the film is held by the other arm. As the ring frame moves to the top of the machine it pulls the rope behind the last two full webs of film and is released after it reaches the top of the load.

"By eliminating the need to re-wrap pallets or manually affix tails, our customers have saved nearly $30,000 annually," said Schmidt.