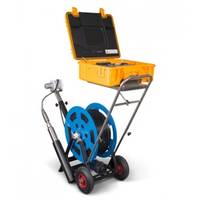 Well Camera STRAHL from Fiberscope.net is designed for underground application for inspecting water and oil wells, shafts and mines. The 63mm camera head is equipped with two cameras - one provides the side view via 360 degree endless rotation and the other camera fixed straight view down the hole. This inspection camera comes with Wifi connectivity, intuitive control unit and cable ranging between 200 and 500 m on a motorized reel. The control unit features 10 in. color PAL/NTSC display.

The new cost-effective Well Camera STRAHL presents a viable alternative to many costlier and bulkier units currently on the market. Designed practically for all underground applications, the unit can also be used underwater, for its 63mm (2.48’’) camera head is good for up to 50 bar of water pressure. The camera head does not have any external movable parts significantly reducing the risk of damage during inspections. The camera head houses two cameras, one of which provides side view via 360 degree endless rotation, while the other camera features fixed straight view down the hole. Illumination is provided by built-in super bright LEDs. Depending on the application, probe lengths up to a striking 500 meters (1640’) are available.

The control unit of the inspection system has intuitive operation features and is equipped with a large 10’’ color PAL/NTSC display, and a number of built-in features that make inspection an easy task, among them a Wifi module, a microphone, a temperature sensor, a digital footage counter, and a compass. Inspections may be documented via captured photo or video files stored either on a hard drive of the unit (128GB SSD), or on an external USB device. The Wifi connectivity is particularly helpful for remote access to the unit (up to 100 meters of distance) and for data sharing. A special Android application was developed for this purpose. The inspection system may be powered via a DC or an AC power supply, ensuring greater flexibility and uninterrupted work during field inspections.