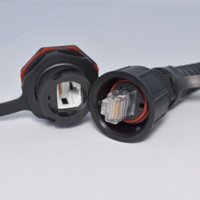 One of the most prominent features of this RoHS-compliant system is its superior sealing capability. Supplementing the IP67-rated shell is a sealable cap, while the circular bayonet style coupling offers both environmental resistance and ease of use. The SealJack is also highly flexible, supporting CAT5E and CAT6 specifications and facilitating 0/100 Base-T, 1G Base-T, 2.5G Base-T and 5G Base-T connections.