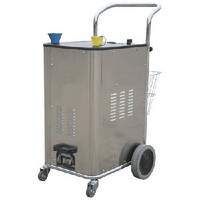 "The new tests confirm the sterilizing capabilities of ATIS® technology that we now incorporate in this new line of 8323-360 CP machines," according to Matthew Baratta Daimer.com global ATIS® spokesman. "We believe our germ-killing technology makes this machine one of the best steam cleaners offered today."

The MRSA lab tests demonstrated that ATIS® steam cleaners generated log reductions measured at 5.378, or 99.999%. In the past ATIS® has demonstrated comparable efficacy on common microbes known to cause disease, including Salmonella cholerasuis, Listeria monocytogene and Aspergillus niger (a mold).

Daimer®'s newly released 8323-360 CP steam cleaners include 14-liter steel boilers that carry a life-time warrantee. The ATIS® technology is integrated into these boilers.

The new machines have been configured for 60 Hz, 230V, three phase power; comparable machines with other power options are also available from Daimer®. The equipment can generate 120 psi and temperatures approaching 329ºF.