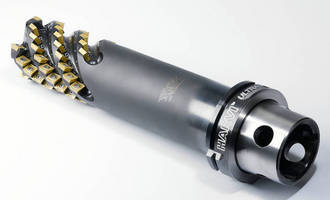 (LATROBE, PA) - When machining tough materials like titanium, there is a need for a spindle connection that makes the best use of available power. Machinists are challenged to maximize metal-removal rates to achieve production efficiencies, yet face low cutting speeds and considerably higher cutting forces. In response, machine tool builders have improved stiffness and damping on spindles and machine structures over the years to minimize undesirable vibrations that deteriorate part quality and tool life. Although all these advances add to greater productivity, the weakest point has often been the spindle connection itself.

Kennametal's response to this traditionally weak point has been the proven KM(TM) quick-change system, recognized by the International Organization for Standardization (ISO) as an ISO standard - ISO 26622. Now Kennametal is introducing its next-generation spindle connection, KM4X(TM).

Some systems may be able to transmit considerable amount of torque, but cutting forces also generate bending moments that will exceed the interface's limits before torque limits are exceeded. The combination of the KM4X(TM) system's high clamping force and controlled interference levels lead to a robust connection, extremely high stiffness, and restrained bending moment for greatly improved performance in titanium machining.

KM4X(TM) engineering results in three times the bending moment resistant capacity compared to other tool systems. This means shops can use their high-performance machining centers to increase speeds and feeds in difficult machining applications, thus gaining the full potential from the machine tool.

Moreover, the ability to retrofit KM4X(TM) to an existing machine tool offers the added advantage of increasing throughput without having to invest in expensive additional capital equipment.

Overview of existing spindle connections
The tool-spindle interface must withstand high loads and yet maintain its rigidity. In most cases it will determine how much material can be removed on a given operation until tool deflection is too high or the onset of chatter is reached.

Several different types of spindle connection have been developed or optimized over the last few decades. Due to a good cost/benefit position, the 7/24 ISO taper became one of the most popular systems in the market. Used successfully in many applications, limitations in its accuracy and speed prevent it from growing further.

The advent of face contact represented a major step forward over the standard 7/24 taper. The combination of face contact with 7/24 solid taper provides higher accuracy in the Z-axis, but also presents some disadvantages, namely the loss in stiffness at higher speeds or high side loads. Most of these tools in the market are solid, and the spindles have relatively low clamping force. Connection stiffness is limited, as radial interference needs to be kept to a minimum. Required tolerances to achieve consistent face contact are thus very tight, leading to high manufacturing costs.

In the early 80's, Kennametal introduced the KV(TM) system, which was a shortened version of CV tooling with a three-ball mechanism acting on a conical surface of a bore. Later versions were designed and sold with face contact. In 1985, Kennametal and Krupp WIDIA initiated a joint program to develop a universal quick-change system, now known as KM(TM) and recently standardized as ISO 26622. The polygonal taper-face connection known as PSC, now also standardized as ISO 26623, and the early 90's HSK system started being employed on machines in Europe and later became DIN 69893, then ISO 121.

Why restricting bending capacity is important
When machining tough materials like titanium, cutting speeds are relatively low due to thermal effects on cutting tools. In response, machine tool builders have improved stiffness and damping on spindles and machine structures over the years. Spindles have been designed with abundant torque at low rotational speeds.

The spindle connection must provide torque and limited bending capacity compatible with machine-tool specifications and the requirements for higher productivity. It becomes obvious in end-milling applications, where projection lengths are typically greater, the limiting factor is the spindle interface's bending capacity. As an example, an indexable helical cutter with 250mm (9.84 in.) projection from spindle face, 80mm (3.15 in.) in diameter generates 4620 Nm (3407.5 ft. lbs.) of bending moment and less than 900 Nm (663.8 ft. lbs.) of torque.

Rules and recommendations are by nature general. For specific advice regarding titanium machining and more on KM4X, contact Kennametal or visit www.kennametal.com.

Kennametal Inc.
Kennametal Inc. delivers productivity to customers seeking peak performance in demanding environments by providing innovative custom and standard wear-resistant solutions. This proven productivity is enabled through our advanced materials sciences and application knowledge. Our commitment to a sustainable environment provides additional value to our customers. Companies operating in everything from airframes to coal mining, from engines to oil wells and from turbochargers to construction recognize Kennametal for extraordinary contributions to their value chains. In fiscal year 2011, customers bought approximately $2.4 billion of Kennametal products and services - delivered by approximately 11,000 talented employees doing business in more than 60 countries - with more than 50 percent of these revenues coming from outside North America. Visit us at www.kennametal.com. [KMT-G]

The KM4X(TM) spindle-connection system from Kennametal has a heavy-duty configuration capable of performing in high-speed, low-torque or low-speed, high-torque conditions.
Share