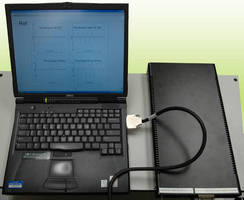 
DYNAFLOW, INC. is pleased to announce the release of Generation II of the ABS Acoustic Bubble Spectrometer©® (ABS) for the measurement of bubble size distributions and void fractions in gas/liquid mixtures. The ABS can be used in a wide variety of applications requiring the monitoring of the bubble population such as high velocity flows, oceanography, chemical engineering, cavitation studies, biological media, ... etc.

The Generation II ABS incorporates many improvements. The data sampling rate has been increased nearly five folds, which expands the bubble detection limit below 10 microns radius. In this new generation, all the hardware external to the processing computer has been integrated in one box. Additionally, a laptop configuration is now available using an Express Card port.

The software processing of the Generation II ABS incorporates the latest developments stemming from the past few years of research. In addition to tests in water media, R&D efforts for acoustic bubble detection have been conducted for other media such as biological tissue, mercury, and food (whipped cream and syrup). The resulting improvements in the signal processing have increased the accuracy of the ABS and allows for the processing of noisy signals that would have been discarded by the previous ABS generation. All improvements were subjected to rigorous testing and validation against optical measurements (high-speed photography and laser scattering) for a range of conditions and bubble sizes.

DYNAFLOW can provide a turn-key system including the ABS instrument, amplifiers, transducers of different sizes, and if needed, transducers embedded in flow pipes or other fixtures. A software-only version of the ABS incorporating the latest developments is also available.
Share