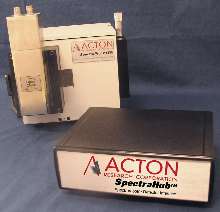 Acton Research Corporation is pleased to announce the introduction of the SpectraHub(TM) interface. The SpectraHub(TM) is designed as an economical spectrometer / detector interface that is compatible with all Acton Research PMT, silicon, and InGaAs single-channel detection systems. The convenience of a USB interface feature, coupled with Acton Resarch's powerful SpectraSense® software and the new SpectraPro 2000 Series imaging monochromators permits scanning spectroscopy and data acquisition through a single connection to the computer. Detectors connect directly to the SpectraHub. For multiple detectors operating simultaneously, simply add one SpectraHub per detector, linked together through USB and the external trigger connections. The SpectraHub also includes PMT high-voltage control as well as photon counting compatibility. Please contact Acton Research for further information.