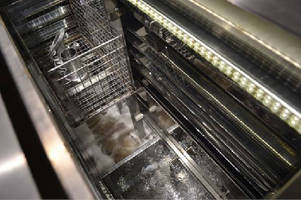 Are You Looking to Replace Trichloroethylene?


Over the past several years, there has been a clear global trend for regulatory agencies to push for the substitution of Trichloroethylene (TCE) with more environmentally responsible alternatives.  This can be a daunting task for those using TCE as a critical part of their solvent cleaning operations, however there are viable alternatives available.

EnSolv is a direct, drop-in replacement solvent for TCE that can be used in existing vapor degreasing equipment with only minor alterations to programs and temperature settings.  EnSolv is a stabilized n-propyl bromide solvent with a superior KB value of 130, which is very comparable to TCE (129).  In most cases, EnSolv will clean parts as well or better than TCE, making the transition to EnSolv virtually seamless.  Other benefits of EnSolv nPB solvents include:

- High Stability – even with titanium, light metals and alloys

- Simple drop-in replacement for trichloroethylene and other chlorinated solvents

- Biodegrades readily in the environment

- Lowest cost alternative to TCE and other solvents

As with any solvent-based solution, there are potential negatives which may be associated with the use of EnSolv.  The primary concerns are based on potential health hazards.  Although there are no known cases of negative health effects in industries where nPB solvents are used appropriately, there are published cases of severe overexposure leading to neurological effects.  These have primarily arisen from case studies in the adhesives industry, where nPB was at one time used as a carrier solvent for foam cushion adhesives.  There are no known cases of long-term, negative health effects from the use of nPB in the precision cleaning and vapor degreasing sectors.

- Low-Cost Relative to other Fluorinated Alternatives

- Contributes to a Safer Workplace

EnSolv NEXT has one of the highest solvency ratings of all of the high-trans fluorinated alternative solvents.  It is also competitively priced, making it the best all-around choice to replace chlorinated solvents or nPB solvents.  EnSolv NEXT has successfully replaced AK-225, TCE, nPB, Vertrel SDG, 3M Novec 72DE and many other solvents.

No matter what your reason for seeking an alternative solvent to Trichloroethylene, Enviro Tech has a solution that will work for you.  Contact us today for more information or a free sample test.  Enviro Tech can also support you by test cleaning sample parts for you, or by offering a complete clean-out, neutralization and charging procedure for your conversion through our affiliates at Power-Kleen.
Share