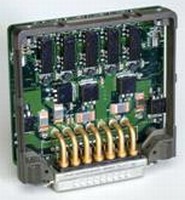 Designed for use in 28 Vdc, microprocessor-controlled SPDUs, 5-channel EPM-109 and 2-channel EPM-110 and EPM-111 Series incorporate micro-controller and Power FET technology into single PCB. Products feature non-derated switching for all types of load while protecting against overload and short circuit. Along with serial data bus interface, each unit includes programmable trip ratings and Built-in-Test feature for critical function verification.

Designed for operation in 28Vdc systems, the EPM-109, -110 and -111 Series SSPCs all provide the latest micro-controller and Power FET technology incorporated into a Printed Circuit Board (PCB). They feature non-derated switching for all types of load while protecting against overload and short circuit. In addition, each includes an extensive Built-in-Test (BIT) feature that verifies all critical functions at startup and then continuously throughout operation.

Examples of these new SSPCs will be featured at the Esterline exhibit, Hall 1, Stand B11, Farnborough Air Show, July 17-23.

Leach International Corporation, a leader since 1919 in high-reliability power switching components, is a subsidiary of Esterline Technologies and one of the largest manufacturers of electrical switching and control devices for the aerospace industry. . For more information on Leach and the new series of next-generation SSPCs, visit www.leachintl.com.