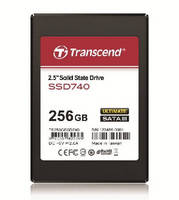 Transcend's SSD740 SSD takes advantage of the next-generation SATA III 6Gb/s interface, DDR3 DRAM cache, and an advanced JMicron JMF667H controller to achieve extremely fast transfer speeds of up to 530MB/s read and 470MB/s write. Essential for handling incompressible data, such as videos, music, and images, the SSD740 also delivers impressive 4k random read/write speeds of up to 283/267MB per second. Full support of the TRIM command, which automatically removes deleted data permanently, and Native Command Queuing (NCQ), which optimizes the order in which received read and write commands are executed, allow the SSD740 to sustain an incredibly high level of performance while enhancing SSD durability and efficiency.

To maximize mobile device battery life and enhance ease of use, the SSD740 supports the new SATA Device Sleep (DevSleep) feature. Developed by the Serial ATA International Organization (SATA-IO), “DevSleep defines the lowest power state for SATA technology, allowing the PHY and other circuitry to be completely powered off, unlike existing partial/slumber states, which require a partially powered PHY.” Basically, in contrast to reduced power states such as standby mode, DevSleep-compatible portable devices conserve more power by shutting down the SATA interface completely and yet are able to resume working immediately when required.