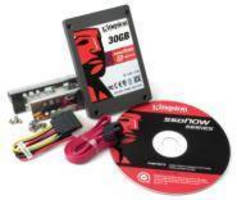 Offering up to 30 GB capacity, SSDNow V Series has 2.5 in. form factor, uses NAND Flash memory components, and helps desktop users extend lifecycle of their systems. Performance is optimized via up to 180 MBps read and 50 MBps write speeds and functionality where PC OS and key applications reside on SSD while all data remain on HDD. Shock and vibration resistant unit supports SMART, has 500,000 hr MTBF rating and consumes 55 mW typ during idle/standby/sleep.

"In our quest to bring SSDs into mainstream use, we're aiming to deliver a lower price point while boosting performance. The new SSDNow V Series 30GB Boot Drive accomplishes those goals," said Ariel Perez, SSD business manager, Kingston. "Desktop users can extend the life cycle of their systems with this drive and IT managers in the enterprise space like it as there is less data for them to backup to the network. In addition, we will also release a 30GB SSD twin-pack for prosumers and enthusiasts who want to take performance to the next level."

The SSDNow V Series 30GB Boot Drive also offers Windows 7 TRIM support, which helps the SSD maintain high performance through the life of the drive. Using the industry-standard PCMark(R) Vantage Advanced HDD Suite, the 30GB Boot Drive received a score of 20257 on a Windows 7 system**. Using PCMark(R) 05 for a Windows XP system, the 30GB Boot Drive received a score of 22519**. PCMark Vantage Advanced HDD Suite and PCMark 05 runs a series of tests such as Windows 7 and XP startup, importing photos, adding music to Windows Media Center and application loading. The score is an indicator of how many bytes are moved per second.

Kingston's SSDNow V Series 30GB Boot Drive is the perfect enhancement for users looking to increase their current desktop performance. It is designed to be used in conjunction with an existing hard-disk drive (HDD). A PC operating system and key applications reside on the SSD while all data such as documents, music, files and photos remain on the HDD.

As part of Kingston's goal to provide a low-cost SSD solution and an easy upgrade path, the drive is also available with a bundle that includes cloning software, 2.5" to 3.5" mounting brackets and SATA data and power cable extenders. Kingston will also offer a solution for performance-minded enthusiasts looking to install a RAID configuration consisting of two 30GB SSD Boot Drives and two sets of mounting brackets and data and power cables.

The Kingston SSDNow V Series 30GB Boot Drive has an MSRP of $109.99 (U.S.) and will begin shipping in February. It is backed by a three-year warranty, 24/7 tech support and legendary Kingston reliability. For more information visit www.kingston.com.

** Based on internal testing. Performance may vary based on system settings.

(1)Some of the listed capacity is used for formatting and other functions and thus is not available for data storage. For more information, please consult Kingston's Flash Memory Guide at Kingston.com/Flash_Memory_Guide.

Kingston and the Kingston logo are registered trademarks of Kingston Technology Corporation. All rights reserved. All other marks may be the property of their respective titleholders.