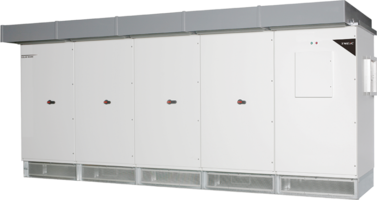 TMEIC Corporation in Roanoke, Va. introduces the next generation of SOLAR WARE SAMURAI™ Inverters, approved for outdoor installation. The new inverter is the latest addition to TMEIC's portfolio of PV utility-scale solar inverters for industrial markets, offering 3.2MW at 1500V.

Built on decades of engineering experience with power electronics, SOLAR WARE SAMURAI™ inverters offer the industry's most advanced grid management in an efficient, compact footprint. The new inverters will be available in mid-2017.

"The SOLAR WARE SAMURAI™ 3.2MW model advances the revolutionary design of the SOLAR WARE™ series, providing greater power and efficiency to the solar industry," Donn Samsa, TMEIC Renewable Energy General Manager said. "This next generation inverter is the result of decades of research and development to create the most advanced inverters in the industry."