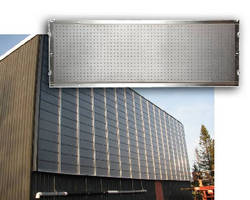 Featuring wall-mounted design that simulates glass-like facade, Lubi(TM) produces max output of 254 BTU/h/ftÂ² and temperature increases of up 81Â°F above ambient outdoor temperatures, making it suitable for pre-heating outdoor air and supplemental heating of facilities. Each 3 x 1 ft polycarbonate panel has 906 perforations, which are dimpled and contoured to prevent rainwater infiltration. Ability to draw air through perforations makes Lubi insensitive to wind speeds of 7 mph or less.

The Lubi is a wall-mounted solar collector that simulates an aesthetic architectural glass-like facade, but provides up to 80.7-percent peak heating efficiencies, which is the highest efficiency ever recorded for any solar air technology, according to Canadian Standards Association (CSA-International) certification tests. The Lubi's capabilities of producing temperature increases of up to 81°F (45°C) above ambient outdoor temperatures. This allows it to fulfill applications ranging from pre-heating outdoor air to supplemental heating of facilities, depending upon application, geography and weather conditions. Maximum outputs are 254-BTU/h/ft2 (800-watts/m2)
The Lubi is18-percent more efficient than its nearest solar air heating competitor thanks to its patent-pending, translucent perforated panel technology. Each 3 x 1-foot (900 x 320-mm) polycarbonate panel has 906 perforations. Unlike wall-mounted metal solar collectors that suffer significant thermal losses in on their exterior panel surfaces, the Lubi's panels greatly reduce thermal loss because of their transparency and the cooling effect of outdoor ambient air being drawn through the perforations by the building's HVAC air handling system.

When mounted on brick or concrete walls, the Lubi's translucency allows sunlight to penetrate the panels and become trapped or absorbed into the building wall that continues to radiate as a thermal mass long after sundown.

Also, the Lubi is 18 and 58-percent more efficient than other solar collectors when mounted to a black or white wall, respectively. Other wall-mounted solar air collectors heat air via conduction from their metal facade surfaces, which require darker colors that may not always suit architectural aesthetics.

In southern climates where dehumidification is used to precondition high latent heat loads of outdoor air, the Lubi can also be used for desiccant regeneration when positioned upstream from costly-to-operate gas-fired heaters used for enthalpy wheel drying.

The Lubi's payback can range from zero to several years depending on geographical location, climate conditions, heating application, government tax advantages, utility incentives and other factors. In masonry new construction, the Lubi can substitute for expensive brick wall construction and offer as much as a zero payback.

Other Lubi features are:

o The Lubi has also been rated as the world's most efficient solar equipment by the National Solar Test Facility (NSTF), a Mississauga, Ont.-based third-party laboratory that tests and rates solar technologies under controlled temperature/sunlight/wind and is sanctioned by the Solar Rating and Certification Corp., (SRCC), Cocoa, Fla.

o The Lubi offers a 10-year warranty, but expected lifecycles are 20 years or more before panel replacement is needed.

o Even with cloudy conditions, the Lubi can provide useful energy and fuel savings for preheating outdoor air, as required by ASHRAE Standard 62.

o The Lubi's ability to draw air through its perforations make it insensitive to wind speeds of 7-mph (3-m/s) and less.

o Custom manufacturing and a modular concept allows integration to any architectural style and window circumvention. The Lubi is installed anywhere from 2 to 10-inches (5 to 25-centimeters) from the wall, depending on the airflow pattern, number of air intakes, wall surface and wall geometry.

o In summer, when heating equipment is idle, the Lubi doesn't overheat because heat escapes through the collector and doesn't pose an additional cooling load to the building.

o The Lubi's aluminum substructure was designed, with the help of architects and contractors, to be easily assembled and mounted quickly to any wall.