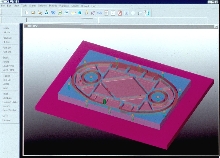 NCCS Announces an All New NCL/IPV

Newport Beach, California (November 1, 2001)-Numerical Control Computer Sciences announces the release of their new and improved NCL/IPV. With the combination of LightWork Design and NCCS, we have put together a promising solution of verification
software.

LightWork Design of Shefield, UK develops and markets the leading technological solutions for modeling, analyzing and verifying the CNC material removal prncess. The company has a global customer base that encompasses North America. Europe and Japan. This new technology has now been added to the NCL/IPV product sold by NCCS. NCCS is delighted to join with LightWork in providing users with the latest in NC Verification technology.

The new version uses true solid modeling technology to simulate the material removal process. Users can rotate and zoom the cut part at any time during the verification session.

The new NCL/IPV is built directly into NCL and thus shares a common interface with NCL, making it much easier to use and access than previous versions. Simulation and dynamic viewing speeds are very impressive. In fact, we have completed several benchmarks against competitive products and have found it to be substantially faster.

Other features include the ability to compare the cut part with NCL surfaces and to model multiple stock and fixture types directly in NCL. These are just some of the numerous
enhancements now packaged in NCL/IPV.

NCL is a powerful Computer-Aided Manufacturing software package which generates simultaneous 2 through 5-axis NC tool paths and provides parametric 3D modeling. All geometric modeling functions are fully associative. A change to the model results in an immediate change to corresponding tool paths. NCL is ideally suited for environments where design changes are frequent, such as the aerospace industry. NCL also supports full
parametric programming where a family of parts can be machined by simply filling in a form. NCL is used extensively in the aerospace, turbomachinery, power generation, tire mold, and
composite industries.
Share