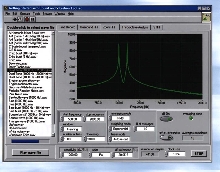 AUSTIN, Texas - June 25, 2002 - National Instruments extends the power of its LabVIEW development environment with a new version of the Sound and Vibration Toolset, which adds frequency measurements including zoom FFT, peak search, power-in-band, and more. The toolset simplifies custom sound and vibration application development for engineers and scientists.

The NI Sound and Vibration Toolset Version 2.0 also ships with more than 30 real-world LabVIEW application examples to help engineers and scientists get up and running quickly, including engine run up, pass-by noise, frequency response, and orbit plots.

Users can combine the toolset with LabVIEW and other NI products, such as the NI PCI-4472, a 24-bit, eight-channel simultaneous sampling acquisition board, to build applications to test against standards including ANSI and IEC. They can also integrate other measurements such as temperature, pressure, image acquisition, and motion control. Using the NI modular measurement platform, engineers and scientists can leverage the power of their PC to build high performance, low-cost sound and vibration applications. The Sound and Vibration Toolset Version 2.0 works with LabVIEW Versions 6.0 and higher (Full and Professional Development Systems).

About NI
NI leverages commercial technologies, such as industry-standard computers and the Internet, to deliver customer-defined measurement and automation solutions. Headquartered in Austin, Texas, NI has more than 2,900 employees and direct operations in 37 countries. NI increases the productivity of engineers and scientists worldwide by delivering easy-to-integrate software and modular hardware. In 2001, the company sold products to more than 24,000 different companies in more than 60 countries around the world. For the past three consecutive years, FORTUNE magazine has named NI one of the 100 best companies to work for in America.