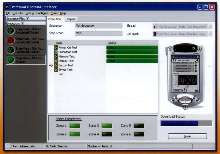 "The new TestStand 3.0 adapters and user interface controls are a big step forward," said Raymond Bender, senior engineer at the Panasonic Wireless Development Center. "The new features will be very useful as we move towards standardizing on a test software platform and begin building our next generation test systems."

With the new TestStand 3.0 user interface controls, engineers can develop custom operator interfaces for test applications in minutes rather than days. The new controls manage all communication required between TestStand and the operator interface. The manager controls automate the high-level communication with the TestStand engine. The visible controls resemble common controls, such as buttons, labels and list boxes, and communicate with the manager controls to automatically respond to events generated by the TestStand engine as the tests execute.

Engineers can quickly deploy test systems using the new deployment utility to ensure all of the necessary test sequences, code modules and resource files transport to the appropriate deployed test stations. Because the deployment utility tightly integrates with the TestStand sequence editor workspace environment, engineers can efficiently modify, manage and organize test projects and ensure continuous deployment and updates of their test systems.

National Instruments (www.ni.com) is a technology pioneer and leader in virtual instrumentation - a revolutionary concept that has changed the way engineers and scientists approach measurement and automation. Leveraging the PC and its related technologies, virtual instrumentation increases productivity and lowers costs for customers worldwide through easy-to-integrate software, such as the NI LabVIEW graphical development environment and modular hardware, such as PXI modules for data acquisition, instrument control and machine vision. Headquartered in Austin, Texas, NI has more than 3,000 employees and direct operations in 40 countries. In 2002, the company sold products to more than 25,000 different companies in more than 80 countries around the world. For the past four consecutive years, FORTUNE magazine has named NI one of the 100 best companies
to work for in America.

Readers may obtain investment information from the company's investor relations department at (512) 683-5090,
by sending e-mail to nati@ni.com or on the Web at http://ni.com/nati.