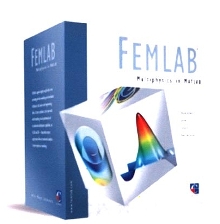 COMSOL delivers FEMLAB® v2.3 with new versions of the Structural Mechanics Module, the Chemical Engineering Module, and the Electromagnetics Module

Burlington, MA, May 1, 2002- COMSOL is pleased to present FEMLAB v2.3 featuring new releases of the Structural Mechanics Module, the Chemical Engineering Module, and the Electromagnetics Module. FEMLAB v2.3 supplies new technology for modeling and simulation in all science and engineering fields by introducing a set of new solvers for parametric analysis, modeling of large vector field models in electromagnetics and structural mechanics as well as transport processes in chemical engineering. It also introduces new eigenvalue solvers for large models in eigenfrequency and eigenmode analyses.

Modeling and simulation are becoming indispensable tools in design, optimization, and research. An important part of these tasks is the estimation of the influence of different parameters that describe a model or simulation. FEMLAB v2.3's parametric solver offers an ideal way to examine a parameterized series
of models. The varied parameter typically represents a material property, frequency or reaction rate. The information obtained for one set of variables is then used for the following sets for fast and efficient parameter sweeping.

The new iterative eigenvalue solver allows one to solve large eigenfrequency problems in structural mechanics. It also extends FEMLAB's capabilities of handling analysis of cavities and other resonance structures in microwave engineering and photonics.

What is New in the Structural Mechanics Module

One important family of structural mechanics analysis is required for the modeling of complex and thin structures. These types of studies can now be easily carried out using the new shell elements. These elements may be combined with beam elements to accurately describe thin structures supported by an internal beam structure, such as pressurized tanks, airplane wings and fuselages.

The Structural Mechanics Module substantially reduces the computational and memory requirements by efficiently using FEMLAB's new solvers for large and complex models. This means that the geometric multigrid and iterative eigenfrequency solvers are able to model hundreds of thousands of degrees of freedom on a normal PC.

What is New in the Chemical Engineering Module

The Chemical Engineering Module provides a powerful way of modeling momentum, heat and mass transport coupled to chemical reactions. In version 2.3, new fluid mechanics and transport
applications are available which increases its user-friendliness.

Fluid flow studies can now be easily performed using the new applications for non-Newtonian fluids, suitable for treating different types of shear-thickening and shear-thinning problems. These new applications can be applied in the modeling of flow in polymer and fiber suspensions, pastes, etc. For compressible flow, Euler models are now available for the simulation of gas flow at high flow rates. For incompressible turbulent flow, a new k - E turbulence model is now available as a ready-to-use application.

In studies regarding transport of diluted species in a carrier gas, Fickean diffusion accounts for the interaction between the dissolved species and the dominating solvent gas. When all species are present in a comparable amount, the interactions between all the involved species must be accounted for. This is addressed in the Chemical Engineering Module by the new Maxwell-Stefan applications, which also include the combination of arbitrary reaction kinetics, momentum and heat transport. This feature allows for the modeling of gas phase reactors, separators, and filtration units.

In applications regarding the mass transport of charged species, migration in an electrical field gives a considerable contribution to the flux. Hence, two new applications in the Chemical Engineering Module ensure that the proper description of electro-kinetic fluid transport and transport in electrochemical cells are available in ready-to-use formulations. This considerably simplifies the task of modeling transport in MEMS devices, fuel cells, and batteries.

What is New in the Electromagnetics Module

The Electromagnetics Module provides a unique environment for the simulation of wave propagation in radio frequency and microwave engineering, photonics, optoelectronics, and AC-DC electromagnetics in 2D and 3D. In version 2.3, new applications for analysis of photonics waveguides, optical fibers, and other optoelectronic devices are featured. The Electromagnetics
Module facilitates the simultaneous study of heat transfer, structural analysis, and field propagation in a photonics waveguide such as birefringence resulting from thermo-stress-optical effects. It offers ready-to-use, fully compatible applications to perform this type of analysis in FEMLAB's graphical user interface without the need for any file transfer between the different modeling steps. Furthermore, the postprocessing in the graphical user interface allows for the easy calculation of lumped parameters from the model and provides the visualization of fields and potentials.

Utilizing the improved solvers in FEMLAB, the Electromagnetics Module can easily handle inhomogeneous, anisotropic and dispersive media and media with losses or gains. Moreover, the new eigenmode solver can now treat large 2D and 3D structures in microwave engineering photonics, and AC-DC applications.

- Geometric multiqrid solver: The new parametric solver now is able to treat large 3D models for stationary problems in all fields of engineering and science.

- Turbulence models: A new k-F model is now available for studies of turbulent flow. Also available is a set of wall functions and boundary conditions for turbulent incompressible
flows.

FEMLAB v2.3 starts shipping June 1, 2002. In the USA, a single-user license for Windows costs $4,495.00. The package is also available for Unix or as a network license. Educational discounts are available.

The COMSOL group is a fast growing high-tech engineering software company with a proven track record and a vision as a future leader of the industry. The company was founded in July
1986 in Stockholm Sweden. COMSOL has grown to include offices in Denmark, Finland, Norway, Germany, France, UK and USA, in addition to distributors all around the world.

Specifically COMSOL has focused on the engineering, applied mathematics and physics fields. The flagship product, FEMLAB®, was developed in-house by COMSOL.