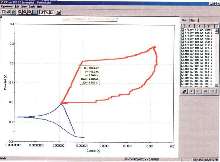 PowerCORR module, part of Electrochemistry PowerSuite, performs electrochemically-based corrosion measurements with potentiostats/galvanostats. It offers 12 standard techniques, along with capability to create, modify, and save additional custom techniques. Graphics capabilities permit up to 4 different plots of same data to be viewed simultaneously on screen, as well as capability to overlay previously acquired data for comparative purposes.

Princeton Applied Research Announces the Next Generation of their Corrosion Measurement Software, PowerCORR

Oak Ridge, TN - Princeton Applied Research has announced the introduction of their latest software module for their Electrochemistry PowerSuite series, PowerCORR, for performing electrochemically-based corrosion measurements with their world-class potentiostats/galvanostats.

The PowerCORR software offers twelve standard techniques to select from, along with the capability to create, modify, and save additional custom techniques. Techniques such as Linear Polarization, Tafel, and Cyclic Polarization are complemented with data analysis tools such as Rp Fit, Line Fit, and Tafel Fit. The graphics capabilities in PowerCORR permit up to four different plots of the same data to be viewed simultaneously on the screen, as well as the capability to add previously acquired data as an overlay for comparative purposes.