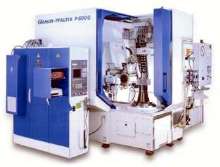 September 8, 2004-- Gleason Corporation has unveiled a powerful new suite of profile grinding software, all driven by the latest Siemens 840D CNC, for its new-generation Gleason-Pfauter Profile Grinders, including the P 600 G. The new software enables users to make dramatic reductions in non-productive time -a disproportionately large and costly part of overall part processing.

Among the most dramatic benefits to end users is Gleason's new patent-pending software that automatically compensates for clamping misalignments, and eliminates the possibility of both radial eccentricity or axial runout after setup. Traditionally, manual setup can take much longer than the actual machining cycle, as the operator methodically centers the part relative to the table and machine axes. But with the new software, this process can be measured in minutes rather than hours. The software, combined with a special measuring device and the calculating power of the new Siemens SINUMERIK 840D, initially determines the position of the part after clamping, and then compensates for actual eccentric or oblique positioning using the machine's five axes during machining.

With Gleason's new Adaptive Process Control software, users will also be able to make significant savings in actual cycle times, by greatly reducing the cutting of air. Gleason's Adaptive Process Control system can actually detect when there is no contact between the grinding wheel and the workpiece flank during axial infeed, and then a higher axial feedrate kicks in. The higher feedrate is used only when the grinding wheel is engaged. This dynamic adaptation of the axial feedrate to actual part size after distortion ultimately can add up to many minutes of cycle time savings. In addition, fewer dressing cycles per workpiece are required, since the same adaptive calculation is used to optimize the dressing interval. Ultimately, overall machining time is further reduced.

The new software also will give users the ability to perform dressable grinding of both tooth flanks simultaneously - a normal procedure on basic, identical involute profiles - but with the flexibility at the same time to grind special profiles on one of the flanks. This can be a particularly useful feature, for example, in creating a special tooth twist for optimum contact conditions in order to compensate for the enormous loads placed on gears in a growing number of applications.

Gleason Corporation is a world leader in the development, manufacture and sale of gear production machinery and related equipment and services. The Company's products are used by customers in automotive, truck, aircraft, agriculture, construction, power tool and marine industries and by a diverse set of customers serving various industrial equipment markets. Gleason has manufacturing operations in Rochester, New York; Rockford, Illinois; Plymouth, England; Munich and Ludwigsburg, Germany; Bangalore, India; and Biel, Switzerland, and has sales and service offices throughout the North and South America and Europe and in the Asia-Pacific region.

More information about Gleason Corporation is available on the World Wide Web at www.gleason.com.
Share