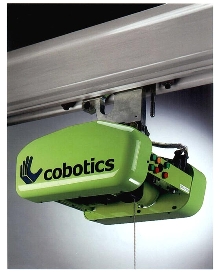 Evanston, IL - Cobotics, Inc. has introduced the iLift, the most advanced lifting and balancing system available for load movement in assembly and material handling environments. Featuring a highly sophisticated "float mode," vertical speeds up to 4.9 feet per second, and programmable automation, the iLift allows operators to meet their highest productivity goals, ensuring that the device will not be tied off to a column. Operators can manipulate loads in exceptionally fast cycle times, while applying just over 2 lbs. of physical force to move a 150-pound load.

The iLift maximizes the functionality of end effectors through a programmable Hub, which features configurable 1/0 for controlling such end effector functions as air cylinders, interlocks, and proximity switches. The iLift also can be configured with Cobotics' iTrolley to create multi-axis Intelligent Assist Device (IAD) systems.